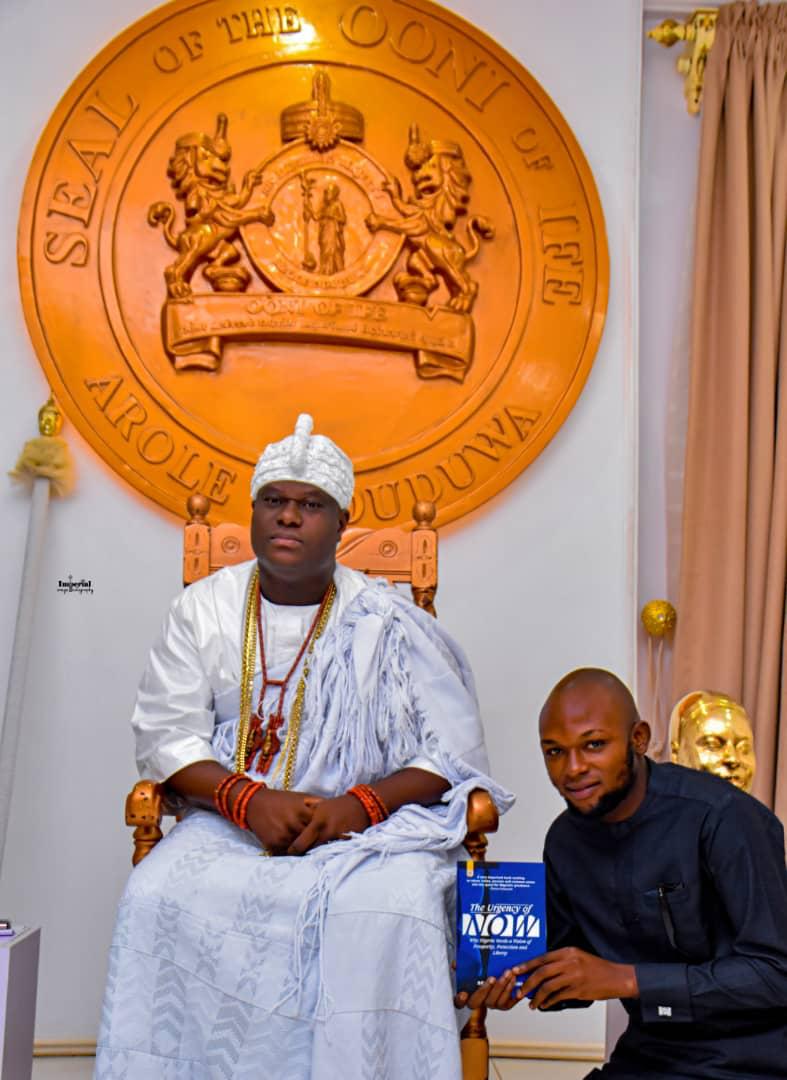 During my formative years, there were only two things I knew about Ile-Ife, the first was that my late grandfather lived there and had a farm, the second one, is the lesson from my rudimentary knowledge of Yoruba, as a young primary school student at the prestigious Holy Cross Catholic School in Lagos Island, we were taught that Ile-Ife is the foundational home of the Yoruba race.

But shortly after my basic education, I would eventually learn more about Ile-Ife, its place in Nigeria’s contemporary history and its importance to not just Nigeria but the world. It is on this foundation that I hold so much reverence and respect for the town, its rich tradition, history, and monarchy.

But more recently, Ile-Ife has become even more endeared to me, not just for the history I talked about earlier, but for the urbane, accessible, and modern disposition of the Ooni of Ife, Oba Enitan Adeyeye Ogunwusi. This personal sentiment is first because I believe that if the Crown all over the world must remain relevant, then it must reinvent itself while maintaining its core, secondly, it must be more relatable, while maintaining its mystery, the last one is that it must become inclusive, while maintaining its dignity, honour and admiration.

And I think the British monarchy especially understands these principles. It is on record that following, the criticism of British politician and writer John Edward Poynder Grigg (Lord Altrincham) in an August 1957 article, titled “The Monarchy Today”, where he argued that the British monarchy at the time was too upper class, although initially met with strong criticism and disapproval by the public. The monarchy did accept some of the reforms Grigg advocated in good faith. It was on the basis that the Queen made her first televised Christmas message, where she told the people that she wanted them to feel closer to her as their sovereign. The article also led to several other reforms in the monarchy, some commentators are of the opinion that the reforms implemented by the monarchy at the time, is till date the British monarchy’s first major step towards modernism.

Following the presentation of The Urgency of Now, my book on Nigeria’s new vision for prosperity, protection, and liberty. I resolved to engage some of Nigeria’s most influential people to expand conversation on some of the ideas that have been canvassed in the book, in the hope that perhaps some of them may become a reality in our lifetime. It is for this reason that I paid a visit to the Ooni, on Thursday August 6 through the support of my brother Kehinde Alex Bankole who is a close-knit of Ooni Adeyeye. In the same week, I had a similar extended discussion with Actor(s) Kate Henshaw and Deyemi Okanlawon. I also shared some time with Olubankole Wellington Banky W’, who without doubt is one of Nigeria’s most accomplished individuals!

Unknowing to me, the wife of the former President of Liberia, Jewel Taylor was also visiting, who kept refraining her awe for the rich history and tradition of Ife throughout her visit. My visit was even more significant considering that it was also a day for the celebration of the annual new yam festival, which I understand was revived by Ooni Adeyeye in 2020, after many years. 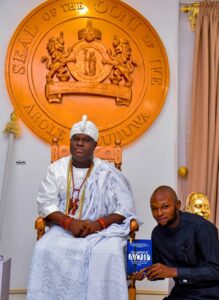 Our audience with the Ooni was preceded by a palace tour, it was during this tour that I learnt that, of the 51 Ooni(s) starting with Oduduwa, the 21st Ooni, was a female named Ooni Luwoo. I understand that the present Oluwo of Iwo is her descendant. But I found that quite interesting, considering that the Yoruba culture too often limits women in tradition and practice. But I learnt that among other new information and her rein is something I am looking forward to exploring.

But there was nothing that fascinated me more than the grace and poise of Ooni and I think that speaks to the modernism I talked about earlier. He was also quite impressed to see that a young person had put something together on the future of Nigeria, he flipped through the pages carefully, said a few royal blessings and was happy to take pictures with me with the display.

But something interesting happened, after our audience in private, he was to attend the traditional new yam festival, on his way to the festival, Kabiyesi said I could re-present the book to him in public at the festival. The presentation was in the presence of all those who attended, including the dignitaries, the traditional and royal chiefs. I felt deeply and doubly honoured. It is a feeling that will remain with me eternally.

And that was truly symbolic, because first, I can almost wager something like a book presentation had never happened in the history of a deeply traditional rite like that of the food festival. The other is the import and impact of Ooni Adeyeye’s gesture as a vital motivation and encouragement for me and the other young people who were watching, while I presented him with the book – a motivation, that someday, writing can take anyone places!