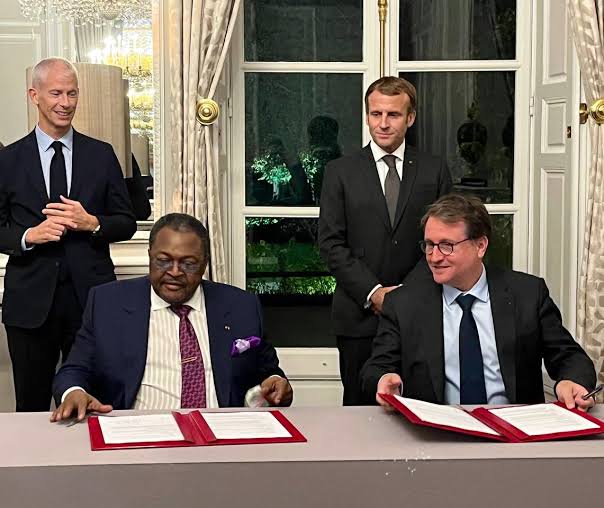 Gatekeepers News reports that President of France, Emmanuel Macron has hosted the signing of a landmark partnership deal between Nigeria’s Globacom and European Telecommunications Satellite Organisation (EutelSat) inside Elysée Palace in Paris, France.

This is part of President Macron’s efforts to keep the Franco-Nigerian Business Council active and keep up momentum ahead of the France-Africa Summit in Montpellier on 8 October.

The Chairman of Globacom and Nigerian-born multi-billionaire tycoon, Dr. Mike Adenuga Jnr. signed the multibillion-dollar partnership with EutelSat which the Chief Executive Officer, Rodolphe Belmer signed on behalf of his company on September 30.

The gigantic inking for satellite deployment in the Nigerian market which was not only witnessed by President Macron had the French External Commerce Minister, Frank Riester present.

The deal is coming in the wake of the Nigerian Government’s announcement of the plan to roll out the 5G network in Nigeria to boost internet connectivity in urban and rural communities.

According to subscriber number and market share, Globacom is Nigeria’s second-largest telecoms operator. Its partnership with France’s EutelSat is expected to enhance the deployment of 500 Wi-Fi relay stations to far-flung rural areas, for connection to a Eutelsat satellite.

In another news, another French group, Vocalcom, which presently manages the software for Glo’s call centres in Nigeria, is hoping to cement a new deal in the mobile-money sphere with Glo.

Adenuga after signing the deal with the French giants said the franchise’s relationship has been a long and extremely beneficial one.

The Globacom chairman said, “The genesis and bedrock of that relationship was the energy team at the Banque Nationale de Paris (BNP) Paris office, led by Guillaume Leenhardt. A great deal of our early success can be attributed to the professionalism, customer orientation, and creativity of that team.

“We worked extremely hard and well together to meet some ridiculously tight deadlines – working through the night till 6 am only to resume work again at 8 am after a quick nap and shower! Those are days I remember with a lot of fondness. Soon after the award of our telecommunications license in 2003, our relationship with another prominent French company, Alcatel, led at the time by Serge Tchuruk, enabled us to fast-track the roll-out of our infrastructure and close the gap on the competition, which had had a 15-month head start.”

In June, President Macron invited six Nigerian business moguls including Adenuga to a private session in respect to Business France Summit at Versailles. Macron brought together top level French CEOs to the table too. The meeting was part of a multi-year campaign pursued by Macron’s administration to chase big contracts in Anglophone Africa.

The Versailles Summit boosted the high-level networking that Minister Frank Riester has been pushing for.

Adenuga was introduced to EutelSat at the Summit and that meeting has borne its fruit, with a partnership signed at the Elysée event on September 30.