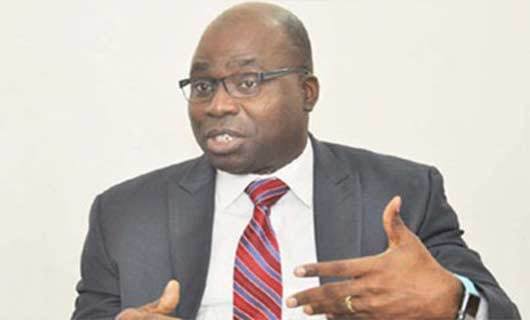 Gatekeepers News reports that Chairman of the Independent Corrupt Practices and Other Related Offences Commission, Professor Bolaji Owasanoye has revealed that the commision is currently Prosecuting a syndicate who specializes in issuing fake employment letter and fraudulently enrol them in IPPIS.

He said, “ICPC is committed to supporting the programs and projects of government one of which is restraining the spiraling cost of governance. This is why the theme of this Summit is Corruption and the Cost of Governance: New Imperatives for Fiscal Transparency.

”Your Excellency has publicly acknowledged a number of times that your government inherited a number of challenges since 2015 when you assumed office including but not limited to an empty purse and the lack of savings when the economy boomed. A major aspect was the astronomical cost of governance at the federal and sub national levels.

“This has continued to reflect in the huge wage bill on personnel and operational cost standing at about 70% of annual budget.

“Your Excellency sir, a major push factor on high cost of governance and rising personnel budget is illegal recruitment, illegal and unilateral increase in wages and remuneration by some MDAs, indiscriminate local and international travels, unreasonable demands by some political appointee board members of MDAs without regard for extant circulars on cost management; procurement fraud, budget padding, etc. ICPC investigation of some cases of illegal recruitment forwarded to us by Head of the Civil Service of the Federation has so far implicated Ministry of Labour and the University College Hospital Ibadan and a number of corrupt staff of other MDAs at a lower level. This abuse of power is consummated with complicity of compromised elements in IPPIS. These cases are currently under investigation.

“At another level, a syndicate of corrupt individuals within the service corruptly employ unsuspecting Nigerians, issue them fake letters of employment, fraudulently enroll them on IPPIS and post them to equally unsuspecting MDAs to commence work. ICPC is prosecuting one of the leaders of the syndicate from whose custody we retrieved several fake letters of recommendation purportedly signed by Chief of Staff to the President, Hon Ministers, Federal Civil Service Commission and other high ranking Nigerians.

“The third phase of ICPC’s projects tracking covered 1083 projects across entire country with exception of Borno and Zamfara due to security challenges. The exercise verified implementation of executive and zip projects of legislators.

“We have so far initiated enforcement actions against 67 contractors and forced them back to site and ensured completion of 966 projects worth N310b some of which were hitherto abandoned.

“Our findings indicate that the same malady of corruption afflicts executive as well as zip projects thus undermining government projections, escalating the cost of governance and denying Nigeria value for money.

“These malady include poor needs assessment that disconnects projects from beneficiaries; false certification of uncompleted contracts as completed, deliberate under performance of contracts incessant criminal diversion and conversion of public property by civil servants, to name just a few.

“Other challenges relate to duplication of projects in the budget. ICPC review found that 257 projects amounting to N20.138b were duplicated in the 2021 budget leading us to submit an advisory to the HMF which was promptly actioned by the Minister to prevent abuse.

”Your Excellency, a number of MDAs have mini civil wars going on between the Board and management and sometimes within the board. These squabbles revolve around abuse of power prohibited by ICPC Act and unreasonable demands by some Board members for privileges contrary to extant circulars and laws and government’s resolve to minimize cost of governance. ICPC’s Ethics Compliance Scorecard of MDAs report for 2021 shows that only 34.6% of the 360 MDAs assessed scored above average in Management Culture and Structure. This poor finding is not unrelated to unstable Boards unable to effectively oversight the institutions.

“Your Excellency sir, let me commend government’s posture against illicit financial flows that drain resources from the nation. The time to further block leakages is now that government revenues are dwindling and practically threatened.

“ICPC is contributing to government’s efforts by its IFF focused project that has resulted in a major advisory to government with recommendations including prohibiting confidentiality clauses that facilitate fraud and money laundering, prevention of tax evasion, prohibition of illegal tax waivers and all practices that undermine government revenue projections. The IFF Inter-Agency Committee has organized a number of capacity building programs for civil servant on how to avoid fraud and IFF prone agreements.

“On this note sir, we advise that government invest more in prevention and behavior change strategies alongside law and order measures to fight corruption. This is important if we are to maximize the gains of prevention and the wisdom that “prevention is better than cure”. ICPC in collaboration with development partners notably Ford Foundation for IFFs and MacArthur Foundation for behavior change is putting more attention to these areas in the months ahead.

“Your Excellency Sir, I’m happy to introduce to Mr. President the winners of the 2021 ICPC Public Service Integrity Awards.

“They are Mr. Muhammad Tukur Ahmad of NDLEA and Mr. Nelson Orji Okoronkwo of Federal Ministry of Information.

”Their profiles are in the program. Included in this year’s award is Mr. Ikenna Steve Nweke a Nigerian student in Japan who has been appointed pioneer ICPC Citizen Anti-Corruption Volunteer Group Icon for his exemplary act of integrity of finding and returning intact a wallet containing substantial sums of money despite his impecunious state as a student. Mr. Nweke is with us virtually today.

“I wish to close by acknowledging and thanking Your Excellency on behalf of the Board, management and entire staff of ICPC for your encouragement, support, motivation and leadership and for providing the much needed political will required for any anti-corruption initiative to succeed.

“On our part we pledge to continue to do our best in the interest of the nation and in line with our statutory mandate.”

In this article:#Featured, Bolaji Owasanoye, ICPC 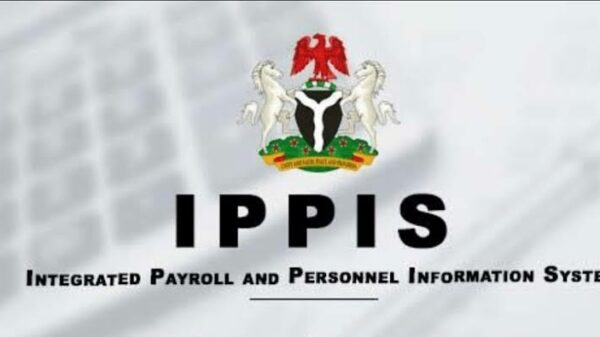 About 54,000 fraudulent payroll entries have been uncovered in the Federal Government’s Integrated Personnel and Payroll Information System (IPPIS) as a result of whistle-blowing.... 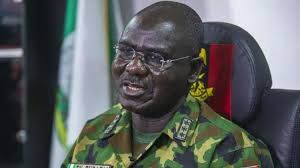 The Independent Corrupt Practices and Other Related Offences Commission (ICPC) has denied discovering billions in the residence of a former Chief of Army Staff,... 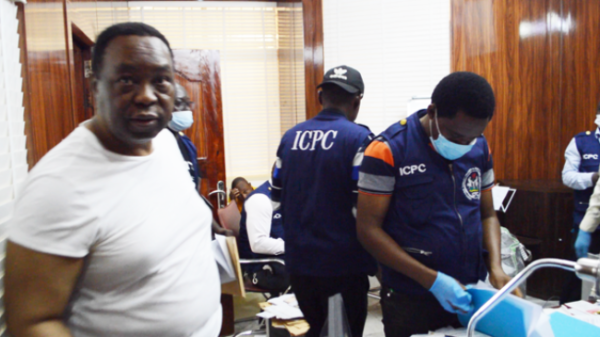 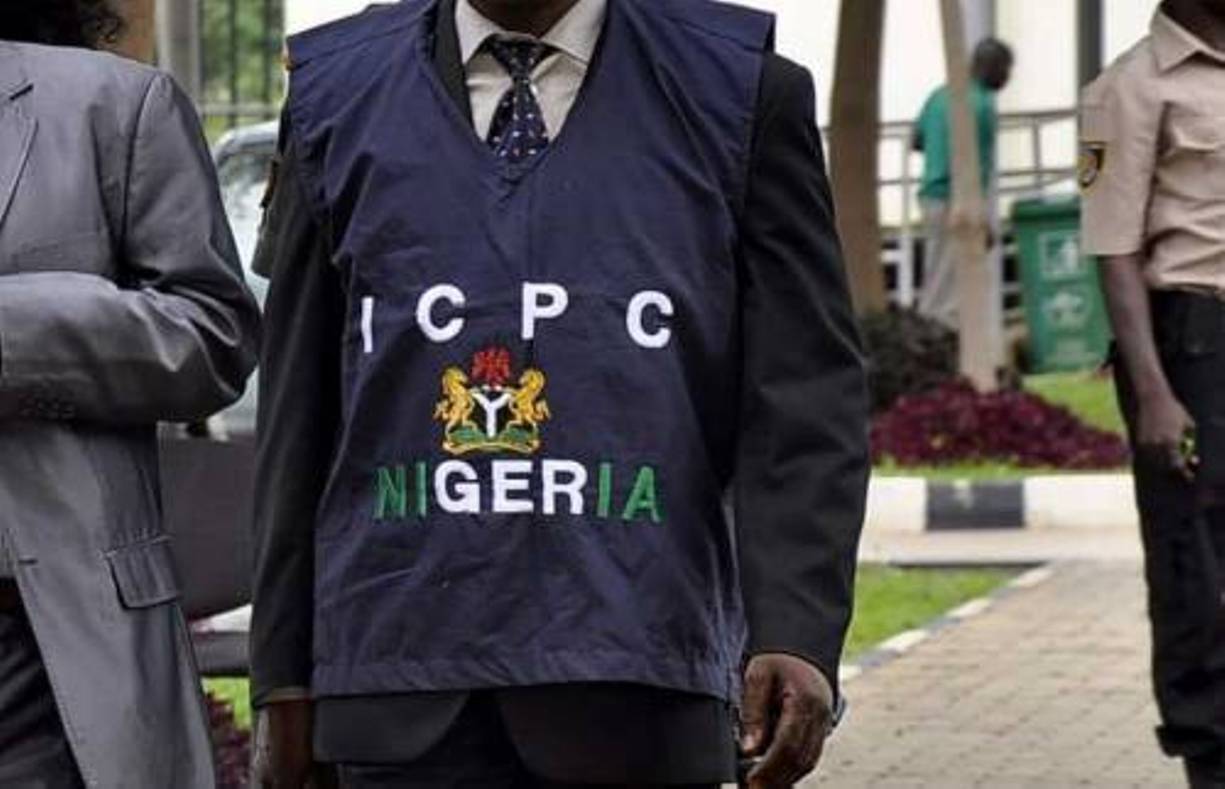