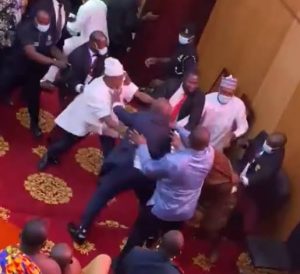 Lawmakers created a scene as they exchange blows over an electronic tax bill.

Gatekeepers News reports that chaos broke out in the Ghana parliament on Monday as some lawmakers exchange blows during voting on the electronic transaction levy bill.

According to reports, the fight started after the speaker, Joe Osei-Owusu left his chair to cast his vote in favour of the bill, a decision that was said to have angered the minority in the house.

The lawmakers, as reported by TSB News, tried to prevent the speaker from casting his vote, arguing he was supposed to be neutral based on the house’s standing order. 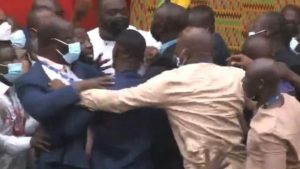 In a viral video, the aggrieved lawmakers climbed the podium and were seen trying to prevent the speaker from going to cast his vote. 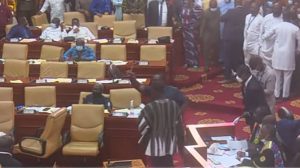 They were seen exchanging blows while some officials tried to protect the speaker’s seat and the mace from being taken.