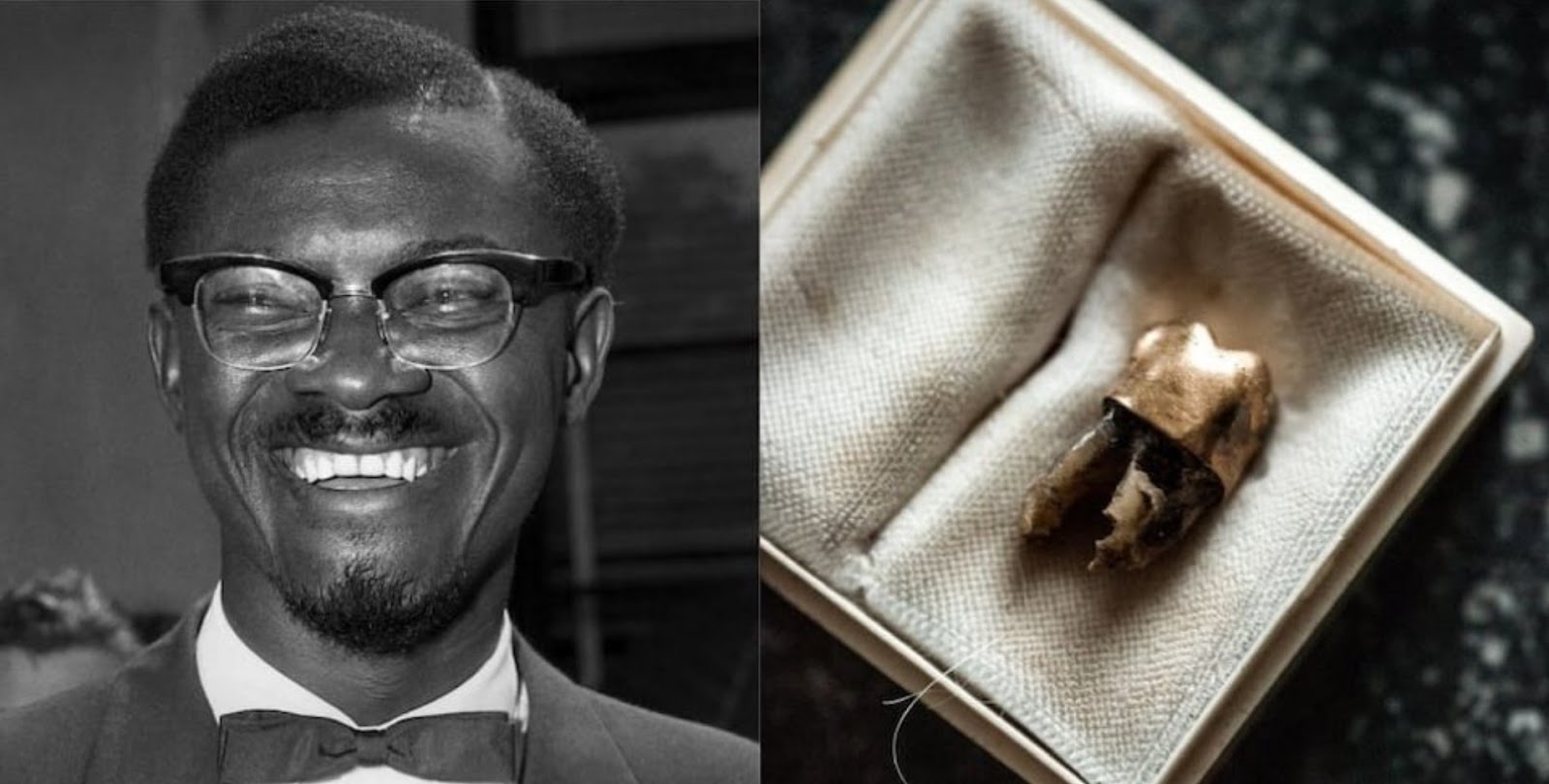 Belgium has returned the gold-crowned tooth that is the remains of Congolese independence hero, Patrice Lumumba who was assassinated on January 17th 1961.

Gatekeepers News reports that Lumumba was shot dead by a firing squad with the tacit backing of former colonial power Belgium and was buried in a shallow grave. His remains were dug up, transported 200km (125 miles), interred again, exhumed and then hacked to pieces and finally dissolved in acid.

The Belgian police commissioner, Gerard Soete, who oversaw and participated in the destruction of the remains took the tooth, he later admitted.

According to BBC, he also talked about a second tooth and two of the corpse’s fingers, but these have not been found.

The tooth has now been returned to the family at a ceremony in Brussels.

Soete’s impulse to pocket the body parts echoed the behaviour of European colonial officials down the decades who took remains back home as macabre mementoes.

But it also served as a final humiliation of a man that Belgium considered an enemy.

Soete, appearing in a documentary in 1999, described the tooth and fingers he took as “a type of hunting trophy”. The language suggests that for the Belgian policeman, Lumumba – who was revered across the continent as a leading voice of African liberation – was less than human.

For Lumumba’s daughter, Juliana, the question is whether the perpetrators were human.

“What amount of hatred must you have to do that?” she asks.

“This is a reminder of what happened with the Nazis, taking pieces of people – and that’s a crime against humanity,” she told the BBC.

Juliana, a prime mover in the campaign to get the tooth returned home, went to Brussels to receive it.

She acknowledges that the handing over of the tooth in Belgium and bringing it back to the Democratic Republic of Congo is symbolic “because what remains is not really enough. But he has to come back to his country where his blood was shed.”

The tooth will be taken around the vast country before being buried in the capital.

What you should know

Lumumba was the Prime Minister of the Democratic Republic in the final days of colonial rule, he headed the cabinet of the newly independent nation when he was 34 from June until September 1960.

His journey from prime minister to the victim of assassination took less than seven months.

In June 1960, at the handover of power, Belgian King Baudouin praised the colonial administration and spoke about his ancestor, Léopold II, as the “civiliser” of the country.

There was no mention of the millions who died or were brutalised under his reign when he ruled what was then known as the Congo Free State as his personal property.

This failure to acknowledge the past foreshadowed years of denial in Belgium, which it has only now begun to come to terms with. Lumumba was not so reticent.

In an address that was not scheduled on the official programme, he spoke about the violence and degradation that the Congolese had suffered.

In devastating rhetoric, interrupted by rounds of applause and a standing ovation when he concluded, Lumumba described “the humiliating slavery that was imposed on us by force”.

The Belgians were stunned, according to academic Ludo De Witte, who wrote a ground-breaking account of the assassination.

Never before had a black African dared to speak like this in front of Europeans. The prime minister, who De Witte says had been described as an illiterate thief in the Belgian press, was seen as having humiliated the king and other Belgian officials.

Some have said that with his speech Lumumba signed his own death warrant, but his murder the following year was also wrapped up in Cold War manoeuvres and a Belgian desire to maintain control.

The Americans also plotted his death because of a possible pivot towards the Soviet Union and his uncompromising anti-colonialism, while a British official wrote a memo suggesting that killing him was an option.

Shortly after independence, the country was hit by a secessionist crisis as the mineral-rich south-eastern Katanga province declared that it was splitting off from the rest of the country.

In the political chaos that followed, Belgian troops were sent in on the grounds that they would protect Belgian nationals, but they also helped support the Katangan administration, which was seen as more sympathetic.

Lumumba himself was dismissed as a prime minister by the president and just over a week later army chief of staff Col Joseph Mobutu seized power.

Lumumba was then placed under house arrest, escaped and re-arrested in December 1960, before being held in the west of the country.

His presence there was seen as a possible source of instability and the Belgian government encouraged his transfer to Katanga.

During the flight there on 16 January 1961 he was assaulted. He was also beaten on arrival as the Katangan leaders pondered what to do with him.

Eventually it was decided that he would face a firing squad and on 17 January he was shot, along with two allies.

This is when police commissioner Soete stepped in. Realising that the bodies could be discovered, a decision was taken “to make them disappear once and for all! There must be no trace left,” according to testimony quoted in De Witte’s book The Assassination of Lumumba.

Armed with saws, sulphuric acid, face masks and whisky, Soete then led a team to move, destroy and dispose of the remains. It was a process that he was later to describe as travelling “to the depths of hell”.

But it was not until nearly 40 years later, in 1999, that he publicly acknowledged that he was involved and that he still actually had a tooth in his possession. He said he had gotten rid of the other body parts he took.