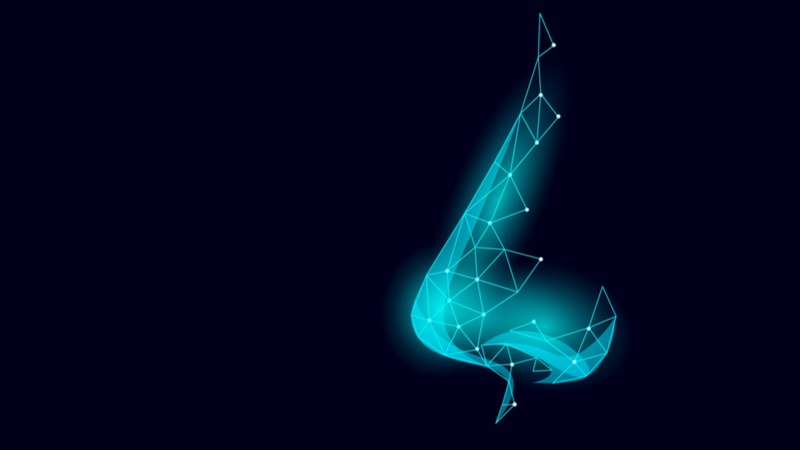 Scientists are working on diagnostic techniques that could sniff out chemical compounds from breath, sweat, tears and other bodily emissions and that act as fingerprints of thousands of diseases.

But to take this concept—known as “volatolomics”—and its associated diagnostic technologies from the laboratory through to commercialization will require collaboration across a great many disciplines. This includes researchers such as chemists, materials scientists and electrical engineers who rarely speak the same language and are largely unfamiliar with each other’s findings. A comprehensive new review of this still very young field aims to be a bridge between the many disparate actors involved.

The review paper was published in the journal Nano Research.

All organisms deliberately release VOCs for various purposes including defense, communication and reproduction. But VOCs are also released incidentally as part of all biological processes, including processes related to illness. Those released are also unique to each of these processes. This means that there is a particular VOC “signature” or “fingerprint” to every disease.

Such VOCs related to disease are also released long before people might be aware that anything is wrong with them, and thus also long before any doctor can carry out a diagnostic technique, whether via blood tests, X-ray, tissue samples or any other examination or lab work. A great many diseases, not least cancers, are much more easily treated the earlier they are diagnosed. Thus if researchers and clinicians are able to categorize the VOC fingerprint of different illnesses, and engineers able to develop devices that could rapidly identify such fingerprints, this could potentially deliver a revolution in medicine’s ability to diagnose and ultimately treat illnesses. As an added bonus, the lack of need for any invasive procedure from such diagnosis via “sniffing” means that it would be painless as well, unlike far too many existing diagnostic techniques.

This is the main idea behind the concept of the very young field of volatolomics, or analysis of the entirety of the set of VOCs that someone exhales in their breath or emits from their skin, sweat, tears, or indeed via any other bodily mechanism.

While the field of volatolomics is new, the concept of diagnosis of disease via a sniffing of someone’s breath actually dates back to the Ancient Greek physician Hippocrates and legendary Ancient Chinese doctor Bian Que, and even over the last 50 years, thousands of VOC fingerprints of diseases have been identified. But until now, we have lacked advanced diagnostic technologies to do much with this information.

What has prompted the explosion of research into volatolomics in the last few years is the development of precisely the sort of technologies, including data mining of vast quantities of data (“Big Data”), machine learning and nanomaterial sensors, that potentially can rapidly and accurately identify these VOC fingerprints in the face of enormous complexity and confounding factors such as the VOCs released from food, drinking, and environmental pollution, and do so no matter which bodily sources they come from.

“But the field is so young, and draws in researchers from many fields such as chemistry, electrical engineering, computer science, materials science, and of course clinicians who deal with patients every day, who are unused to speaking to each other, who typically employ different methodologies, and who often do not even use the same terms,” said Yun Qian, a co-author of the review and researcher with the Cancer Center of Zhejiang University.

“So we brought a bunch of us from these various disciplines together to write a comprehensive review paper that we hope will work as a bridge connecting each other’s expertise in this sprawling field.”

The authors first summarized all the VOCs that are associated with different diseases from all possible bodily sources in a sort of encyclopedia of illness volatiles.

“This part of the review was crucial, as such a list of targets has been highly sought after by the chemists, materials scientists, and electrical engineers in particular,” added Mingshui Yao, another of the authors and researcher at the State Key Laboratory of Multi-phase Complex Systems with the Chinese Academy of Sciences.

“They needed to know what the fingerprints or ‘biomarkers’ are that they are designing their diagnostic equipment for. Now they can just look this up.”

In addition, the review gives a commentary on the state of play of the technologies involved with volatolomics analysis, in particular advanced “electronic nose” (E-nose) and “photonic nose” (P-nose) devices for VOC detection.

In describing the current situation, what obstacles developers of these “robot noses” face, and offering future perspectives, the reviewers aim to both give doctors a good understanding of such cutting-edge detection technologies, and to give all volatolomics researchers an overview of where the main research gaps lie, and so enable a narrowing of the still considerable gap between lab bench and commercial deployment.

The authors hope that with the review as a reference point for everyone involved, these gaps can be filled and technology development obstacles overcome, especially with respect to better VOC absorbing materials, selective sensing materials, advanced sensor structures, and smart data-processing methods.

The ultimate goal is to one day be able to deploy volatolomics as the golden standard in clinical diagnostics.