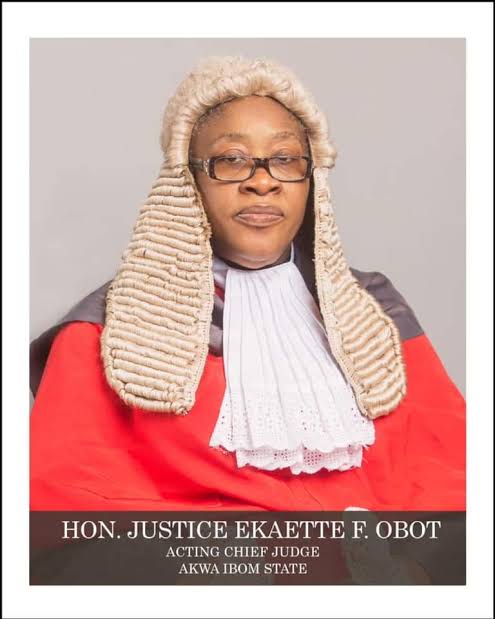 Gatekeepers News reports that Effiong was sentenced over an alleged unruly and contemptuous behaviour in the Akwa Ibom State High court sitting in Uyo.

Effiong was appearing as counsel for Leo Ekpenyong who is being dragged to court for defamation against the Governor of the State, Udom Emmanuel.

Ekpenyong had accused Governor Emmanuel of bribing the Chairman of the 2019 Election Petition Tribunal in the state, Justice W O Akanbi with $1.4million to secure victory for Chris Ekpenyong against Godswill Akpabio of the All Progressives Congress (APC).

According to CKN News, Justice Obot ordered Effiong to exhibit the proper conduct expected of lawyers and to refrain from uncouth acts that tend to bring the court to disrepute.

The Court was entertaining the last witness brought by the prosecution counsel when Effiong put up some exceedingly embarrassing acts.

It began when a reporter with Premium Times, Saviour Imukudo was caught recording the session with a video camera on his phone.

The phone was confiscated and the judge ordered the reporter to leave the courtroom.

Afterwards, Effiong insisted that the judge should rule on a motion he had earlier moved, for the judge to recuse herself from the case.

The Chief Judge insisted on going on with the case, prompting Effiong to start accusing her of bias and unfair handling of the case.

According to reports, Effiong had allegedly despite repeated warnings from the State Chief Judge, constantly raise his voice against Justice Obot alleging that she was taking the matter personally and also queried her decision to send the journalist out of the courtroom.

When the judge ordered Inibehe to leave the court he also refused and maintained his stance.

Chief Judge accused Inibehe of overstepping his bounds and immediately sentenced him to 30 days in the Nigeria Correctional Facility.

In reaction to this, the Counsel to the Plaintiff, Samuel Ikpo said he was shocked that a lawyer could utter such damning and profane utterances against a judge.

Ikpo said, “I believe that when he comes out of the correctional facility, he will learn how to conduct himself before a court.”

He wondered why Inibehe could disobey an order given to him by the judge, who asked him to take off his wig and step aside from the court and he chose to remain obstinate.

“A lawyer should not allow himself to use one client to destroy his reputation before all the judges.

“I think Justice Obot has really been patient with him all these while, even as a lawyer, I could not tolerate the young lawyer’s conduct,” Ikpo added.