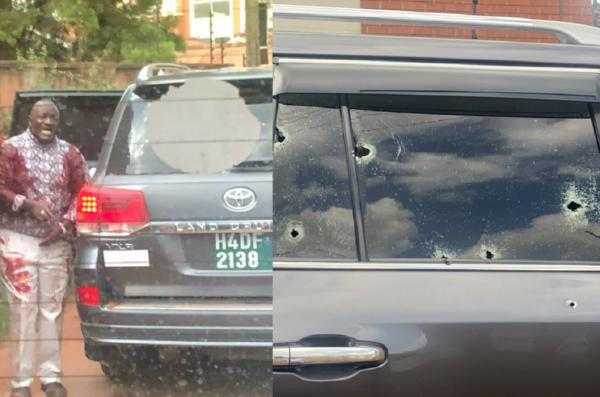 Ugandan Minister of Works and Transport has been attacked by gunmen and his daughter killed in the process.

Gatekeepers News reports that Ugandan Minister of Works and Transport, Katumba Wamala was shot on Tuesday in a “targeted drive-by shooting” which left his 26-year-old daughter, Brenda Nantogo and driver, Haruna Kayondo, dead.

According to the Police, four attackers had followed Wamala from his home in Kampala, the nation’s capital, before they sprayed his vehicle with bullets.

Gatekeepers News gathered that Wamala was travelling with his daughter, his bodyguard and driver in a military registered car when the attack happened.

“The assailants, who were four in number, were riding on two motorcycles with concealed number plates, pulled up next to (General) Katumba Wamala’s car and shot several bullets that instantly killed Nantogo Brenda and Haruna Kayondo,” the police statement said.

The Ugandan Minister has been hospitalised due to the gunfire injuries he sustained but his bodyguard was not hurt according to the Police.

“This is the first major shooting since 2019 and we strongly believe it was a targeted and not random incident.” 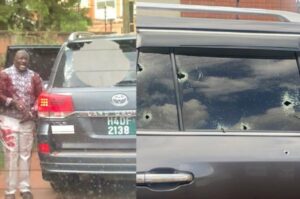 Lokech added that “the exact motivation towards the targeted shooting is not yet established. We consider such attacks as a form of organised crime, with a potential of extremism, aimed at undermining the prevailing stability.”

Wamala served as the Inspector General of Police of the Uganda Police Force from 2001 until 2005.

Ugandan President, Yoweri Museveni in a statement seen by Gatekeepers News on Twitter, described the attackers as “pigs who do not value life”.

“I talked to Gen. Katumba twice on the phone. He is being well-managed,” he said, adding that “we already have clues to those killers.”

Museveni further said “the bodyguard should not have shot in the air. He should have shot to kill. We could be having a dead terrorist instead of scaring away the terrorists. His shooting saved Gen. Katumba by scaring the criminals away. However, killing one or more of the terrorists would have done the same and more.”

The pigs who do not value life shot at Gen. Katumba killed his daughter and driver and injured him. Condolences on the loss of the two Ugandans. I talked to Gen. Katumba twice on the phone. He is being well-managed.