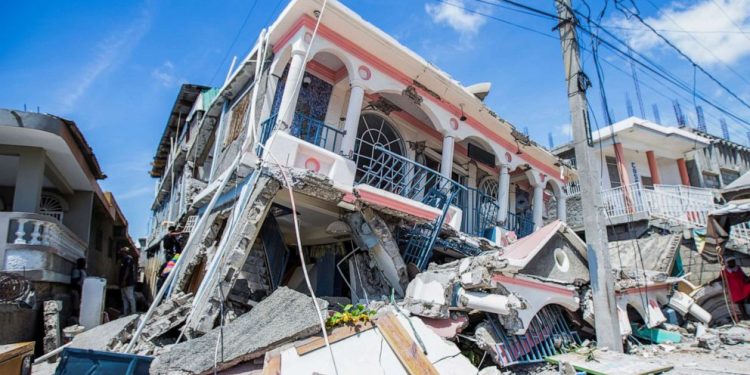 At least 304 people have been confirmed dead and over 1,800 people injured after a 7.2-magnitude earthquake struck Haiti on Saturday.

Gatekeepers News reports that the earthquake was about 12 kilometres (7.5 miles) northeast of Saint-Louis-du-Sud and 10 kilometres deep, according to the US Geological Survey (USGS).

The Haitian government has declared a state of emergency in the Western Department, Southern Department, Nippes, and Grand’Anse following the incident.

“When it comes to medical needs, this is our biggest urgency. We have started to send medications and medical personnel to the facilities that are affected,” Prime Minister Ariel Henry said at a news conference.

“For the people who need urgent special care, we have evacuated a certain number of them, and we will evacuate some more today and tomorrow.”

Gatekeepers News gathered that one hospital in the southern city of Jeremie said it is overwhelmed with patients.

“There are a lot of people coming in…a lot of people,” an administrator at the Hospital Saint Antoine told CNN. “We don’t have enough supplies,” said Antoine who noted that the hospital has set up tents in its courtyard.

“The initial information that I have received from Grand’Anse is heart-wrenching,” the first lady said.

“It hurts my heart for the kids, the mothers, the elderlies, the handicaps, my friends, and all the victims of this earthquake.”

“My brothers and sisters, we have to put our shoulders together to come together to demonstrate our solidarity. It is our togetherness that makes up our strength and resilience. Courage, I will always be by your side,” Moise added.

In this article:Earthquake, Gatekeepers News, Haiti