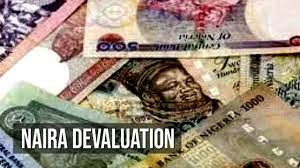 A devaluation is the easiest thing for the CBN. We can follow these sentiments and move the Naira to say N550/$1. It is quite easy. But what are it’s macroeconomic implications? Here are a few:

1. Government debt service is already over 70% of revenue. A devaluation will make it over 100% easily.

3. Fixed income earners, which includes all government workers, will see their real wages (take home pay minutes inflation) evaporate into thin air. The same pay they got last month, which they were already struggling to use to make ends meet, will simply buy less than half of what it bought them last month.

4. This could ignite justifiable calls for salary increases and could cause social unrest, in a country where tensions are already high.

5. Loans that were indexed on FX will be immediately repriced (higher interest rates) and terms will be made much tougher. This could lead to widespread defaults, higher NPLs and financial system instability.

6. Imports will become much more expensive, translating into higher production costs. Producers who can will pass the higher costs on to consumers, who will pay more the same goods. Producers who cannot pass on the cost will shut down their operations over time.

7. Nigerians who buy FX from the CBN for school fees, medical bills, BTA, PTA, etc will pay much more in Naira.

8. Since imports value will rise astronomically and exports won’t (our main export is oil which we cannot control its price or quantity), the country’s current account balance will go into deficit and make our balance sheet much worse!

Leaving aside these arguments, it is shortsighted to assume that the rates in the tiny parallel market (only 7% of Nigeria’s FX market), which serves many corrupt and illegal activities should determine the rate of the Naira. How can rates in 7% of the market determine rates in 93% of the market? How can the tail wag the dog?

Given all these, it is really difficult to see why the Naira should be devalued at this time.

Rather than the intellectually lazy resort to devaluation, and a politically motivated scapegoating of the CBN, a responsible interrogation of the issues should have been better. We should be looking at the more structural reasons for the sustained pressure on the Naira.

For example, let us consider the following questions:

1. Why is it that 80% of cargo ships and planes that bring goods to Nigeria (for which we pay dollars) leave our shores empty (implying we do not earn dollars from potential exports of goods they would have carried)?

2. What has been done about the perennial complaint of many potential exporters about the gridlock of the Ports and the myriad of illegal charges levied by a multiplicity of agencies at the Ports?

4. What is the Government’s budget and plans for the Nigerian Export-Import (NEXIM) Bank? A bank that was set up to specifically finance non-oil exports. NEXIM’s balance sheet is less than 10 percent of the balance sheet of the EXIM banks of Malaysia, India, Indonesia or Turkey. What is the country’s plans to improve this?

5. Nigerian parents now spend over $10 billion annually to educate their children in all parts of world and at all grades of education from primary, secondary and university levels. If we could reverse up to half of this huge annual drain, the Naira will strengthen to under N250/$1. Even middle class families and entry level civil servants no longer believe in the Nigerian educational system or its quality. What is the government (at all levels) doing to change this? Can we begin by requiring that the children of all government officials at all levels (whether elected or appointed) be educated in Nigeria?

6. What is the government doing to improve our healthcare systems and ensure we reverse the need for Nigerians to seek medical treatment abroad even for routine checks? We can save up to $7 billion annually from this and the Naira could strengthen to less than N150/$1 if we include the reversals/savings from educating our children here.

7. In the 80s and 90s, the typical basket of food Nigerians ate was almost totally made in Nigeria. Our clothes were made here with cotton from our farmers, textiles from our mills and embroidery from our tailors. Our cars used tires made here. The cars themselves were made either in Kaduna (Peugeot) or Lagos (Volkswagen). Today, we spend billions of dollars annually importing anything and everything! What is the government’s plan to reverse this trend? Can we begin by requiring that over the next 3-5 years, all government vehicles be made in Nigeria by Innoson Motors or any other car manufacturers? If we can reverse up to 40%, the Naira would strengthen to N70/$1.

8. Over the last 3-5 years, more than 5,000 men have relocated their families to Canada or other places for “better” life. And this trend has continued unabated with no end in sight. Whilst these men are here earning Naira, their major expenses are in dollars for family upkeep, mortgages, car loans etc. This means we have more than 5,000 new men chasing dollars everyday, every week, every month. Imagine if the country gave them some hope to believe and stay, the Naira would be strengthened to N25/$1.

9. From CBN published reports, NNPC used to fund the CBN reserves with over $3 billion per month from sale of crude oil. This contributed immensely to stabilizing the exchange rate. Unfortunately, in the last 7-10 months, the NNPC has not funded the reserves at all, according to the CBN! What is the government doing to reverse this situation and call the NNPC to order/account?

The country’s problems are significant but fixable. The solutions are staring us in the face. We just have to be honest and work diligently to solve them rather than make cheap political statements aimed at scapegoating.

In this article:Devaluation of the naira, Gatekeepers News, Yakubu Abdullah