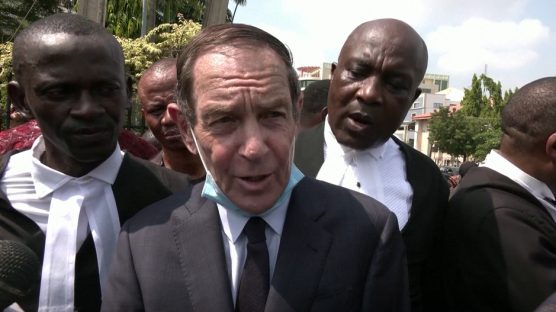 Bruce Fein, the American lawyer of the Indigenous People of Biafra (IPOB) leader, Nnamdi Kanu, has threatened to drag Nigeria to the International Criminal Court (ICC) after being denied access into the courtroom on Wednesday.

Gatekeepers News reports that Fein told journalists after the proceedings that it was not the first time the would be locked out and prevented from monitoring Kanu’s trial.

In his words: “Today was the fifth time I was told I could not enter the courtroom despite the court’s previous order that Nnamdi could have access to any three persons he wants to.

“I had the chance to talk briefly to him on my way to the courtroom. It is clear that I am the target in particular. That’s the reason why this proceeding did not transpire today.

“And I’m here to tell Nigerians and the international community that I’m taking this to international tribunals. It is clear that the Nigerian tribunals are compromised.”

The lawyer said he will petition “the Working Group on Arbitrary Detention in Geneva, the International Court of Justice in the Hague, the ICC in the Hague and I’ll be going to the United States Congress and urging that sanctions be considered against Nigeria for gross violations of fundamental human rights”.

“I’m here not to be an irritant but there are huge international law issues that are present in Nnamdi Kanu’s case. I’m here because I’m an international expert to provide more enlightenment on what legal issues are present here,” Fein added.

Ifeanyi Ejiofor, Kanu’s lead counsel, also maintained that the legal team did not walk out of the court, instead, they were locked out.

“What happened in the court today is the height of travesty of justice. We have more than 50 lawyers who are here in solidarity so we were outside trying to resolve it,” he said.

“When we came to the court, they still insisted that they could not allow the maximum of five persons to have access to the court. And there is space in the court for us to sit.

“We were still trying to resolve it when the judge came in and we were all locked out. When attention was called to the fact that we were outside the court protesting about what happened. Instead of the court calling the attention of the lead counsel to find out what is going on, the court discussed with our client.”

Gatekeepers News reports that the court has adjourned the case to January 19, 2022, to hear the application challenging the competence of the charge and jurisdiction of the court.