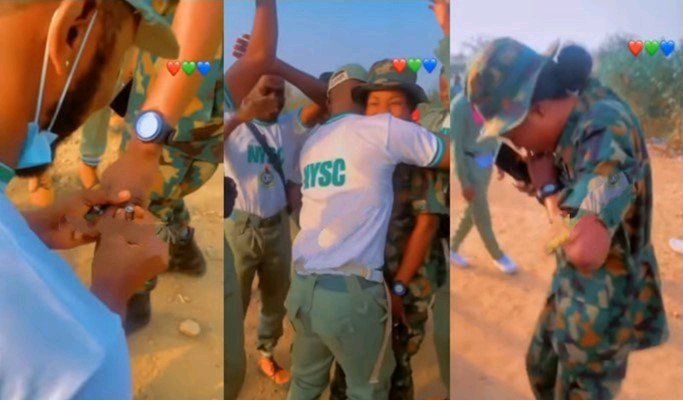 Gatekeepers News reports that the Nigerian Army on Sunday confirmed the detention of a female soldier who accepted the marriage proposal from a corps member at the Yikpata orientation camp of the National Youth Service Corps (NYSC) in Kwara State.

Gatekeepers News earlier shared the video of the duo engaging in lovey-dovey moments.

However, the Army Spokesman, Onyema Nwachukwu said the soldier violated several of the military’s rules of engagement.

In a statement, Nwachukwu stated that some of her offences include fraternisation while on official duty and indulging in romance while in uniform.

He added that the soldier’s conduct was prejudicial to good order and military discipline.

Nwachukwu noted that the public would have interpreted the action to mean the soldier was taking advantage of a corps member if the soldier were to be a male.

The statement read: “The female soldier in question violated the following rules of the NA. 1. Fraternisation while on official duty at the NYSC camp. That is, indulging in amorous relationship with a trainee.

“2. A personnel must have served for 3 years before he/she can qualify for marriage 3. She disobeyed the Armed Forces of Nigeria standing guidelines and directives for the use of social media.

“4. Indulging in romance while in uniform. 5. Her conduct was prejudicial to good order and military discipline. All the above, if proven are in violation of extant laws with attendant disciplinary and penal implications. As a personnel, her task was to train the Youth Corps members and not to indulge in amorous relationship with any of them.

“These rules were put in place for the purpose of proper administration and discipline in the Army. If I may ask, what if the soldier was a male? How would the public have perceived his action?

“Definitely, it would have been perceived as taking advantage of a female corper, a trainee, put in his care for training. The same applies here. The Nigerian military, like all others, has its disciplinary codes, distinct from that of the general society. Every personnel has voluntarily undertaken to be bound by this code.”