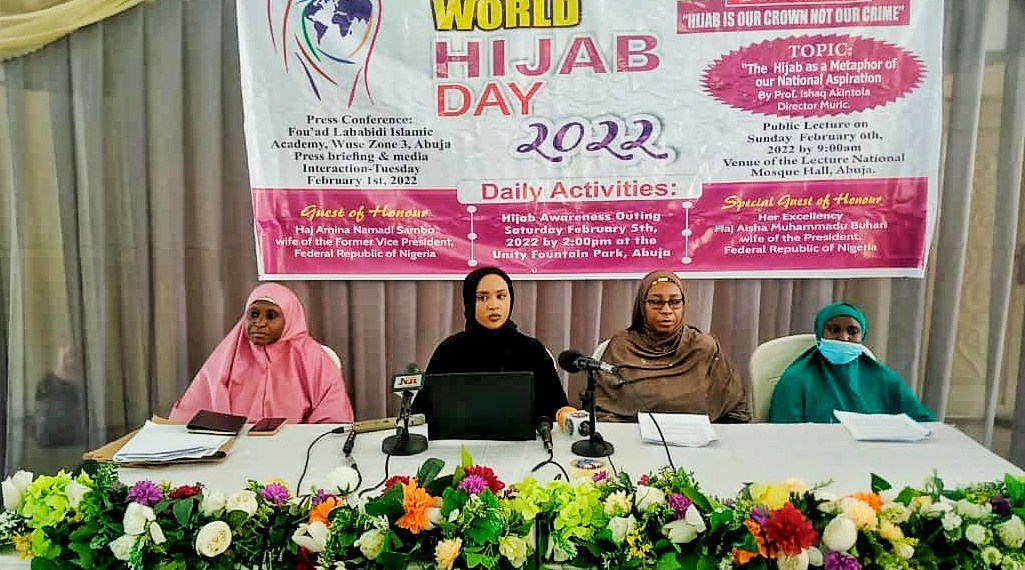 Coalition of Nigerian Muslim Women has called for actions against anti-hijab sentiments as it joins its counterparts across the world to mark the 2022 edition of World Hijab Day.

Gatekeepers News reports that World Hijab Day is celebrated every February 1st by people in 190 countries. It is an initiative of Nazma Khan and was first marked in 2013 across the world, Nigeria inclusive. The day is set aside to create awareness of the Muslim woman’s dress; its position, and what it represents, galvanising support for its wearers and campaigning against its prohibition, castigation or maltreatment of its wearer.

The theme for 2022 is “Hijab is our Crown not our crime”, #DressedNotOppressed.

Gatekeepers News reports that Hijab wearing is a controversial issue in Nigeria as women are being deprived of their right to wear it by some institutions and organizations, creating embarrassing situations as the calls for authorities to take actions against the discrimination lingers.

A case in point was in March 2021, when Christian groups mobilised and barricaded some schools to protest the directive announced by the Kwara State Government that all public schools should respect the rights of Muslim students to wear the head covering if they choose to.

Another was in November 2021, when the Federal University of Agriculture in Abeokuta (FUNAAB) Ogun state, placed a ban on the use of hijab and niqab by Muslim female students on campus.

Also in December 2021, Noheemat, a Muslim youth corps member posted to Akwa Ibom State was harassed and prevented from using hijab by the Camp Officials until Muslim groups and government authorities intervened.

“We therefore still have a lot of work to do. We will continue to push forward and need all the support we can get from citizens, the three arms of government, media, religious leaders, traditional leaders, educational institutions, civil society groups, and all relevant bodies,” Nigerian Muslim Women said at a press conference held on Tuesday in Abuja, the nation’s capital.

The Coalition noted that it has not changed its focus of constructive engagement with all relevant stakeholders and the general Nigerian public.

“This stance aims to drive the simple message that the hijab is the Muslim Woman and she is the hijab. She can participate effectively in all public undertakings with the Hijab. Her right to wear it in public is guaranteed by our laws and should be protected by the symbols of authority in all spheres of life. She should therefore not suffer any harm by exercising this right,’ the Coalition said.

The Coalition called on Hijabis (wearers of hijab), to utilize its cover proudly, in a positive and productive manner so that they are maximally useful and beneficial to themselves and the society.

“We call on all people, our fellow compatriots, institutions, leaders and those in positions of authority to see our hijab as an enabler, not an inhibitor. We are saying ‘we are ok’, ‘we symbolize nothing but good’, and as in the common parlance that says ‘dress the way you want to be addressed’, we plead to the world to ‘address us the way we are dressed’. They should treat it with respect and understanding, as a tool and a vehicle for inclusiveness, a paved road to reach out to both the most remote and excluded populations of women & children and the nearest and more visible ones.”

Muslim Women also urged that governments at all levels create and provide services that cater to all, including those whose appearance is defined by their belief and obedience to a command from the divine creator.

The Coalition called on the National Assembly to introduce and pass laws that serve the interest of all citizens and which protect the rights and freedoms of all to education, health, employment, finance, homeownership, careers, etc. regardless of what one wears.

“We call on the Ministry of Education at the federal and state levels to pay attention to unnecessary victimization of students which has become a recurring decimal in our schools and institutions.

“We call on the National Youth Service Corps authorities to introduce an optional set of uniforms for Muslim female corps members that desire to appear in modest clothing. They should also set up a monitoring mechanism at orientation camps to ensure no corps member is denied the right to protect the sanctity of her beliefs by removing her hijab or being forced to wear items such as short nickers.”

Meanwhile, the Coalition, during its hijab awareness outreach on Saturday at Unity Fountain, Abuja, got two reverts (a male and a female) who accepted Islam. See the videos below:

Gatekeepers News reports that the Coalition of Nigerian Muslim Women was formed as a collaboration platform for various Muslim women organisations and institutions in a bid to promote and propagate issues of concern that affect the private and public life of women, especially Muslim women and girls.

The coalition is made up of groups such as FOMWAN, NASFAT, Women in Da’awah, Ansaruddeen, Al-Habibiya, JADAFIA, Abuja Muslim Forum, Al-Mu’minat, An-nisa Foundation, Sisters of Jannah, The Criterion, Initiative for Muslim Sisters, Hidaya Islamic Charity and many more.