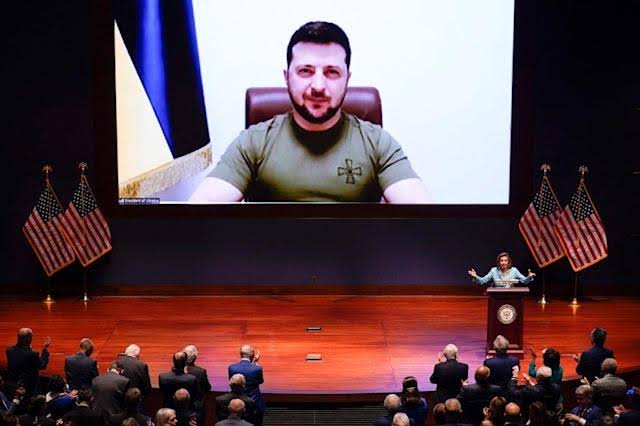 Ukraine’s President, Volodymyr Zelensky has urged the US and NATO allies to enforce a no-fly zone over Ukraine.

Gatekeepers News reports that Zelensky on Tuesday, invoked the horror of the 2001 terror attacks on the US as he pleaded for more military aid as Ukraine battles Russian forces.

The Ukrainian President made this known in a historic video link address to the US Congress.

Zelensky during the address said, “I need to protect the sky.”

Meanwhile, US President Joe Biden is later set to sign off an extra $800m (£612m) in military aid to embattled Ukraine.

Zelensky while urging the assembled US politicians to remember coming under attack in the past – at Pearl Harbor in 1941 and on 11 September 2001, said Ukrainians were experiencing the same thing every day.

“In your great history, you have pages that would allow you to understand the Ukrainian history. Understand us now,” he said.

The Ukrainian leader also referenced US civil rights leader Martin Luther King’s famous speech, “I have a dream, these words are known to each of you – today I can say I have a need. I need to protect the sky,” he said.

He further showed a video of missile strikes on his country’s cities and the resulting dead and wounded people.

With a no-fly zone over Ukraine, NATO forces would have to engage directly with any Russian planes spotted in those skies and shoot at them if necessary.

As an alternative to a no-fly zone, Zelensky requested air-defence systems and aircraft.

He has earlier asked the US and the EU for Polish MiG-29 fighter jets, but this has been rejected by President Biden over fears this would pull NATO members into the war.

Through this, Zelensky again demonstrated he had a firm grasp on how to plead his nation’s case to a foreign audience in a language they could understand – both literally and figuratively.

After the speech, House Speaker Nancy Pelosi tweeted that it had been a “distinct privilege” to hear from the Ukrainian President, adding that the US was “unwavering in our commitment to the people of Ukraine as they courageously defend democracy”.

According to a US media report, the $800m in funding set to be signed off later will go towards anti-armour and anti-aircraft weapons, such as Stingers and Javelins.

The funding is covered by a spending bill on humanitarian, defensive, and economic assistance to Ukraine that was approved by Congress last week.

In a related development, NATO Defence Ministers are meeting in Brussels to discuss their response to the invasion.

President Biden is expected to travel to Brussels next week to meet NATO allies and participate in a summit of European Union leaders.

On Tuesday, the Prime Ministers of Poland, Slovenia, and the Czech Republic met Zelensky in the evening as a curfew began in the Ukrainian capital, Kyiv. They are the first Western leaders to visit Ukraine since Russia invaded last month.

Afterward, the Czech leader told Ukrainians that they were “not alone”.

Meanwhile, President Zelenskyy earlier said Ukraine must recognise that it cannot be a member of the North Atlantic Treaty Organisation (NATO).

In a video conference with the UK-led joint expeditionary force on Tuesday, Zelenskyy said it is a truth that must be recognised by the Ukrainian people.

“Ukraine is not a member of NATO. We understand that. We have heard for years that the doors were open, but we also heard that we could not join. It’s a truth and it must be recognised.

“I am glad that our people are beginning to understand this and rely on themselves and the partners who are helping us,” Zelensky said.

In this article:9/11, Gatekeepers News, Ukraine War, US, Zelensky