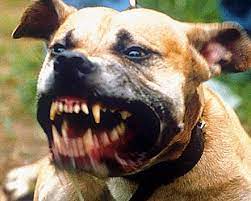 Police are hunting for the owner of a Staffordshire Bull Terrier which viciously mauled a nine-year-old boy in the face.

Gatekeepers News reports that the boy needed surgery after his lip was torn during the attack in Stoke-on-Trent, Staffordshire, on April 20.

It was gathered that the unnamed lad was walking coming back from school around 5.45 pm when he was pounced on by the hound whose owner failed to bring it under control.

Staffordshire Police have released photographs of his injuries in an appeal to track down the woman spotted with the animal.

A force spokesman said: “Officers are appealing for information after a nine-year-old boy was bitten by a dog in Stoke-on-Trent.

“At approximately 5:45 pm on Wednesday 20 April, a boy was bitten on the face by a dog on Belgrave Road, Dresden, at the rear of Belgrave St. Bartholomew’s Academy.

“He suffered facial injuries and was transported to the hospital for treatment.

“Police are conducting enquiries locally and would like to speak to the owner of a large brown/ginger coloured Staffordshire Bull Terrier.”

The owner of the Staffordshire Bull Terrier – a breed which is not banned by the Dangerous Dogs Act – is described as being a white woman, around 5ft 6in tall, aged the late 30s to early 40s and of a slim build with light brown shoulder-length hair.

According to reports, she was wearing sunglasses on her head at the time of the incident.

She was with a man who is described as white, roughly 6ft tall, in his 40s, of medium build with grey crewcut hair and a full grey beard.

He was wearing slim blue jeans and a black polo with blue and red lines on the collar.