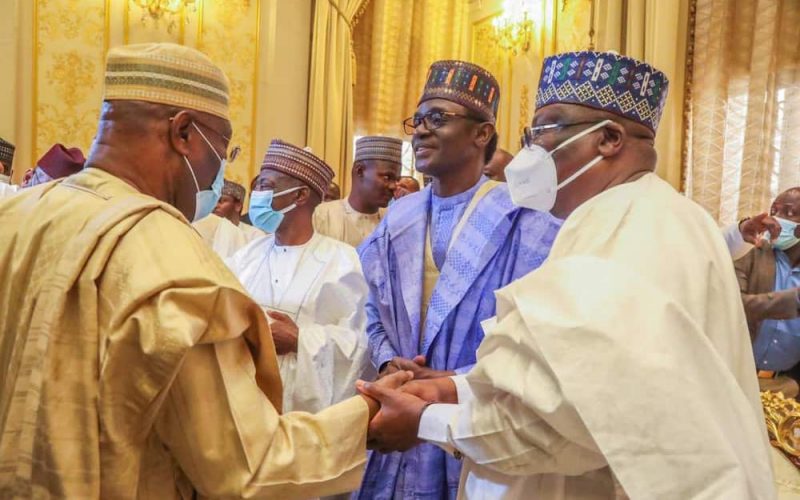 A video has shown that Senate President Ahmad Lawan and Mai Mala Buni, the former caretaker chairman of the All Progressives Congress (APC) have visited the presidential candidate of the Peoples Democratic Party (PDP), Atiku Abubakar on Wednesday after APC presidential primary at Eagle Square.

Gatekeepers News reports that social media users who shared the 29-second video claimed that Lawan and Buni are leading other northern stakeholders, particularly governors, to work with the PDP presidential candidate after the senate president failed to clinch the APC ticket.

The video was captioned “THE GAME JUST GET STARTED.”

“Northern blood brothers remain, Northern blood brothers, these people might handover a life snake to Tinubu. There are two things they are going to do to make sure the north retains power, they are either going to start decamping to PDP or remain in APC and work against Tinubu’s interest. North and power are cousins. You don’t trust them when it comes to that.”

However, checks by Gatekeepers News revealed that the video was first taken earlier this year (January 22) when Atiku, Lawan, Buni, and other northern leaders paid a condolence visit to Dahiru Mangal, a Katsina business magnate, over the loss of his 85-year-old mother.

The former vice-president had posted pictures from the visit on social media.

“Earlier today, I paid a condolence visit to Alhaji Dahiru Mangal in Katsina over the loss of his beloved mother and matriarch of their family, Hajiya Murja Bara’u. I pray that Almighty Allah will comfort the family and grant her Aljannah Firdaus in paradise,” Atiku had written on Twitter.

Earlier today, I paid a condolence visit to Alhaji Dahiru Mangal in Katsina over the loss of his beloved mother and matriarch of their family, Hajiya Murja Bara'u. I pray that Almighty Allah will comfort the family and grant her Aljannah Firdaus in Paradise. pic.twitter.com/uCGGn5WnD3

The video shared on social media claiming that Lawan, Buni, and some northern leaders went to form an alliance with Atiku ahead of the 2023 general election is not recent, and therefore, the viral video is misleading.

In this article:Atiku, Gatekeepers News, Lawan