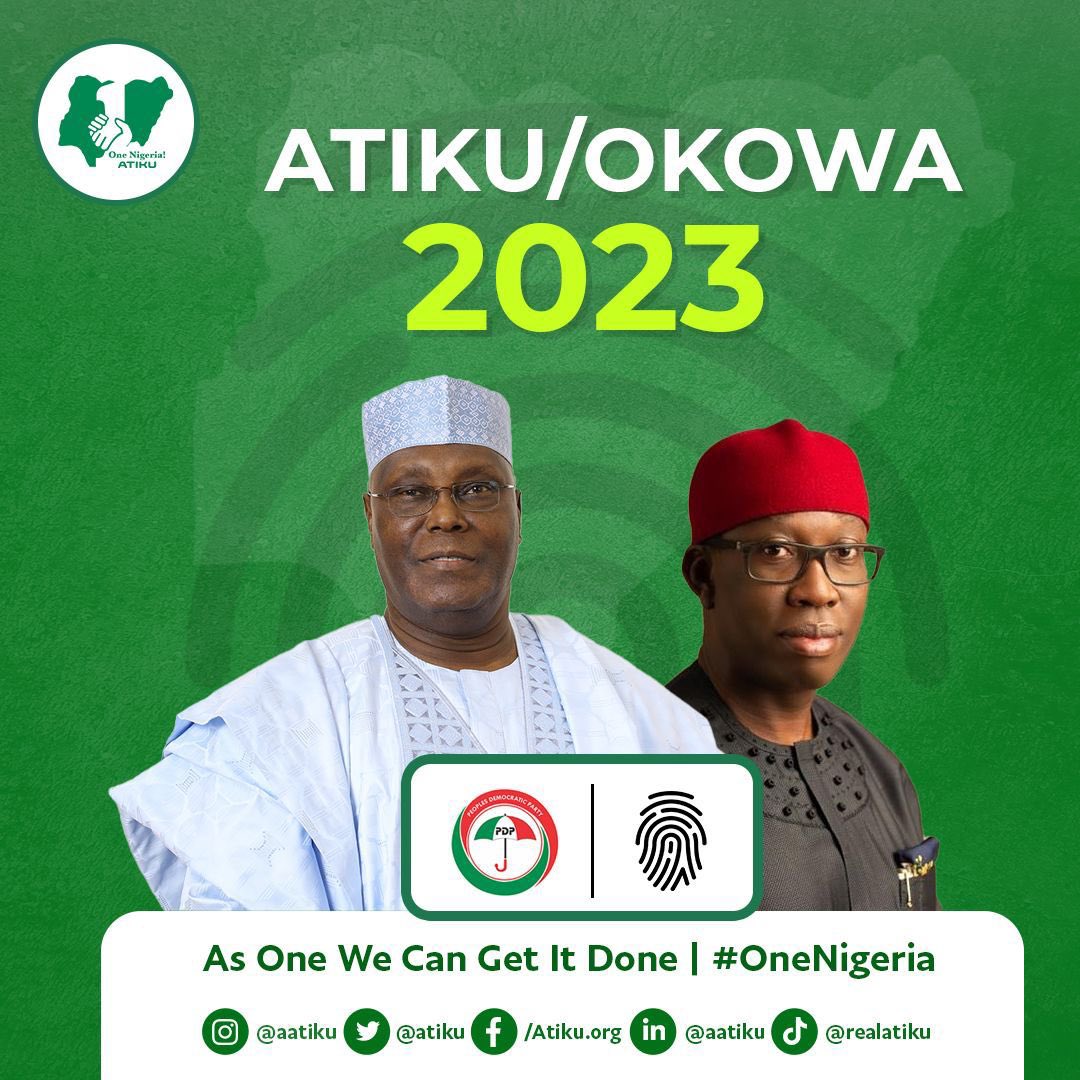 Few hours after Atiku Abubakar, presidential candidate of the Peoples Democratic Party (PDP) announced Governor Ifeanyi Okowa of Delta State, South-South Nigeria as his running mate ahead of the 2023 Presidential elections, there is a looming crisis in the major opposition party.

Gatekeepers News reports that the PDP is split as a result of the announcement as key members of the National Working Committee (NWC) the Board of Trustees, as well as the PDP Governors’ Forum, have vehemently rejected Okowa’s emergence as Vice Presidential candidate.

The major stakeholders have insisted that Okowa was not the party’s choice but manipulated by the National Chairman, Dr. Iyorchia Ayu, against the recommendation of the statutory organs of the party, which favoured Rivers State, Governor Nyesom Wike.

According to a report, trouble started after the National Chairman ambushed and hijacked the process and jettisoned the recommended choice of the 19-member committee made up of members of NWC, BoT, PDP Governors, and former Governors well as representatives of the members of the party in National Assembly.

A source revealed that the PDP leadership confirmed that three nominations, namely Governor Wike, Governor Okowa, and Akwa Ibom State Governor Udom Emmanuel were forwarded to the committee for consideration.

It was further learnt that after very extensive consideration of issues in terms of competence, commitment, experience, and acceptability, 16 members of the 19-member committee voted for Governor Wike against three that voted for Governor Okowa.

The committee, thereafter, conveyed its report to the NWC which on Wednesday reviewed and adopted the report with Governor Wike as a clear preferred candidate by the organs of the party.

It was further gathered that the NWC resolved to meet the Presidential Candidate before the unveiling of Governor Wike to the national caucus on Thursday.

According to the source, the process was sabotaged and hijacked by the National Chairman who he said had variously expressed personal animosity against Governor Wike and arm-twisted Atiku Abubakar to ignore the recommendation of the statutory organs of the party and announce Okowa as his running mate to the National Caucus.

This is apparently responsible for the absence of key party leaders at Okowa’s hurried unveiling at the party’s national secretariat in Abuja on Thursday.

10 out of the 13 PDP governors, key BoT members as well as some members of the NWC, including the National Secretary were absent from the event.

A visibly angry BoT member said, “The PDP is in disarray. Many stakeholders are not happy with the emergence of Governor Okowa as a Vice Presidential candidate. With the way things are going, our party may not meet the INEC deadline for submission of candidate and that means the PDP will not have a Presidential candidate for the election. I think PDP is losing the election by itself.”

A major stakeholder revealed that unless urgent steps were taken to stave off the impending crisis, the Party might face a constitutional crisis and therefore may lose the next election.

The Stakeholder who chose to stay anonymous said, “Today’s event was scheduled for 12 Noon. But it was delayed to wait for prominent members of the leadership.

“The National Secretary, Deputy Chairman, South-south, NWC members refused to show up at the ceremony even though they were at the Wadata Plaza.

“The PDP governors, apart from Okowa, bluntly refused to grace the occasion. The Bauchi Governor Bala Mohammed came in late and did not know that what was going on was not at the unveiling of the recommended candidate.

“Prominent members of the BoT abstained.

“The NWC members are insisting that the Party’s choice for the office of VP must be honoured and moreso as the choice had been communicated to the recommended candidate.

“They emphasised that there is nowhere in the Party’s constitution and the Electoral Act that the National Chairman and the Presidential Candidate have the power to decide for the Party who the Vice-presidential candidate should be.

“Leaders of the Party are calling for an urgent step to redress the situation, otherwise the Party will go into a Major Crisis that will rob it of victory in the forthcoming election.”

The source added that ” Every action Ayu has taken since he came in as National Chairman has been moving towards the direction of destroying the party.

“There is nowhere in the Electoral Act that the party chairman and the presidential candidate should sit down and pick a running mate against the recommendation of the party.”

The source further emphasised that “They – governors, majority of the BoT members and majority of other stakeholders including NWC members – had come around based on the recommendation of the Party’s various committees that had recommended Rivers State Governor, Nyesom Wike, as the choice of PDP for VP.

“This position had also been communicated to the candidate, Wike, and other stakeholders.

“Having passed through the rout, the National Chairman, Dr Iyorchia Ayu, and the Presidential Candidate decided on their own to drop the party’s position and took another decision.

“As it is, majority of the leaders are calling for Ayu’s resignation because all his actions since he came in as the party’s chairman have been to destroy it.”