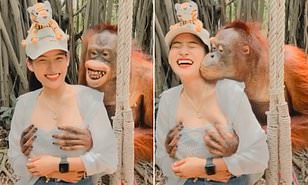 A cheeky orangutan has grabbed a female tourist’s boobs and kissed her at Bangkok’s Safari World, a zoo in Thailand.

Gatekeepers News reports that the great ape stood behind the tourist for a picture but the tourist was surprised when the creature cupped her breasts.

The orangutan went further to plant a kiss on the woman’s cheek after flashing a wide grin to amused tourists.

Onlooker Dararat Suwanmai, said, “I burst out laughing when I realised. He was such a friendly creature.”

The orangutan then walked back to his caretaker to be ready for the next tourist to take selfies with.

It was unclear if the animal was trained to do that to entertain zoo visitors.

Orangutans are among the smartest primates, however, incredibly low reproductive rates have meant population declines have left them a critically endangered species.