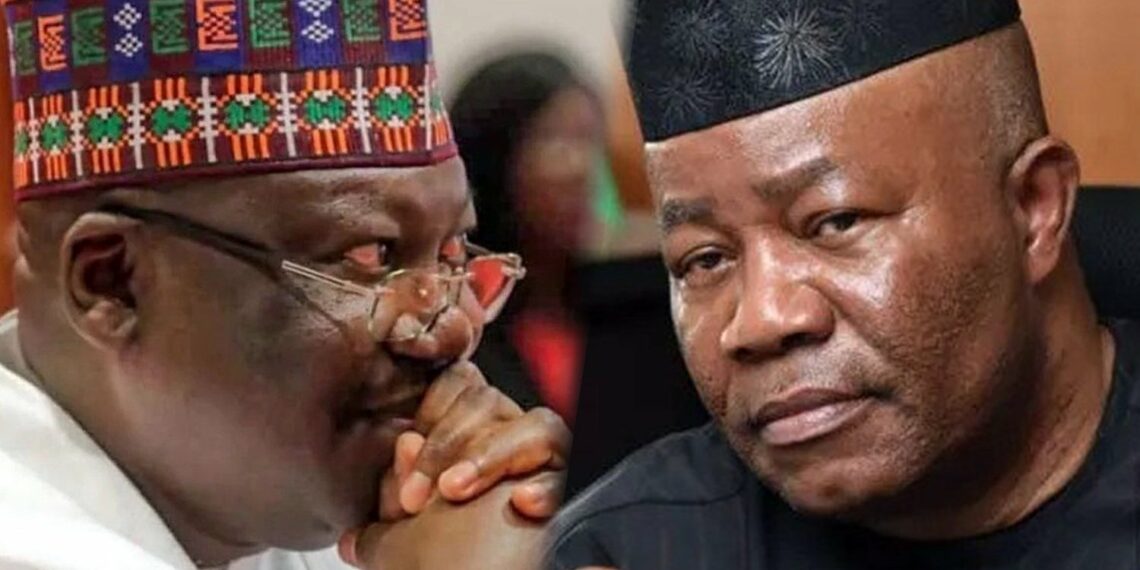 Gatekeepers News earlier reported that INEC said the Senate President, Ahmad Lawan will not be returning to the upper chamber in 2023.

Similarly, the name of a former Minister of Niger Delta affairs, Godswill Akpabio, and two other expected candidates were also missing from the published particulars of candidates in late June.

In reaction to the development, INEC in a statement on Saturday stated that it stands on the election and reports it received from state chapters as regards the primary election conducted in Akwa Ibom North and Yobe North senatorial districts.

The electoral body’s National Commissioner and Chairman, Information and Voter Education Committee, Festus Okoye said that the attention of the commission had been drawn to speculations circulating online on the outcome of some of the recent primaries conducted by political parties and related issues.

The statement read, “The attention of the commission has been drawn to speculations circulating online on the outcome of some of the recent primaries conducted by political parties and related issues.

“In particular, allegations intended to impugn the integrity of the commission have been made in respect of the Akwa Ibom North West and Yobe North senatorial districts.

“To set the record straight, the Constitution of the Federal Republic of Nigeria mandates the commission to monitor the organisation and operation of political parties, including their finances, conventions, congresses, and party primaries.

“In line with its constitutional and legal obligations, the commission deployed monitors to the various constituencies and received reports of such exercise. In relation to the primaries for the Akwa Ibom North West and Yobe North Senatorial Districts, the commission stands by the reports received from our state offices.”

INEC stated that it left the spaces blank because it didn’t recognise the names submitted by the party as of when it published the names of senatorial candidates about two weeks ago.

INEC added, “For this reason, the commission did not publish the personal particulars of any candidate for the two constituencies at variance with the state reports.

“Right now, the commission is funtus officio in the two cases. Aggrieved parties are at liberty to approach the Federal High Court and seek redress as provided in section 285 of the Constitution of the Federal Republic of Nigeria, 1999 (as amended) and sections 29(5) and 84(14) of the Electoral Act, 2022.”

The commission further disclosed that it had received a total of 433 requests of Certified True Copies, involving the certification of 1,662,776 pages of documents.

According to the electoral body, “Its staff has been working hard, including weekends, to meet the deluge of requests received. As of Friday, July 8, 2022, the commission has processed 433 requests involving the certification of 1,662,776 pages of documents.

“Many of them are awaiting collection at the INEC headquarters by some of the same applicants complaining of delay in issuance of the CTCs.

“Section 29 (4) of the Electoral Act provides that any person may apply to the Commission for a copy of nomination form, affidavit, and any other document submitted by a candidate at an election and the Commission shall, upon payment of a prescribed fee, issue such person with a certified copy of document within 14 days.

“Persons applying for CTC of documents should endeavor to act timely and within the ambit of the law. The Commission will continue to uphold the integrity of the electoral process, including the deepening of the deployment of technology to enhance the credibility of elections,” the statement stated.

Gatekeepers News earlier reported that Bashir Sheriff Machina, the All Progressives Congress, APC, senatorial candidate for Yobe North, had threatened to drag the party to court for removing his name on the list forwarded to the Independent National Electoral Commission (INEC).

Machina was announced the winner of the primary conducted in Yobe North but the name of Senate President, Ahmad Lawan was submitted as the candidate for the Yobe North Senatorial district in the 2023 elections.

Lawan who had contested for the presidency at the recently concluded Special Convention and Presidential Primary of the party lost to Bola Tinubu while Machina had participated in the Senatorial Primary Election in Yobe and emerged the winner.