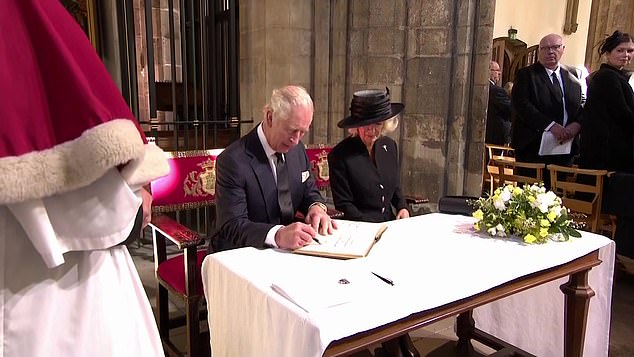 King Charles III appeared to bring his own pen to a Welsh cathedral today just days after being left furious by a string of ink mishaps during his visit to Northern Ireland earlier this week.

Gatekeepers News reports that the Monarch and the Queen Consort arrived in Wales today in their first visit since the death of Queen Elizabeth II.

The Royal couple made their way to Llandaff Cathedral to attend a prayer and reflection service for his late mother and Britain’s longest serving head of state.

Today the King was filmed calmly signing the paper in the cathedral before passing his pen and the book to his wife.

Both of them were in Wales in their final stop during their tour of the four nations of the United Kingdom.

Hundreds of royalists and tourists went down to the cathedral to see the new King and Queen Consort.

One Twitter user said: ‘Pleased to see that King Charles now appears to be using his own fountain pen with completely satisfactory results.’

Another added: ‘Charles brought his own pen to Wales. Obviously learning fast…’

And one more user wrote: ‘I love how King Charles III brought his own pen this time after ‘leaking pen incident’ in [Northern] Ireland. Bless him.’

The King’s decision to carry his own fountain pen comes days after a few drops on ink soured the mood at Hillsborough Castle, Belfast, earlier this week.

His Majesty appeared flustered by dripping ink as he tried to sign a book towards the end of his visit.

Charles complained about the pen he was using to sign his name, announcing he ‘can’t bear this bloody thing’ as he appeared to furiously rub the ink from his fingers.

The Queen Consort later suggested it was leaking and asked for a replacement, as the King briskly turned on his heels and left the room flanked by aides.

The faulty instrument was swiftly removed and replaced by flustered courtiers before Camilla sat down to sign the book herself from inside the historic residence.

The incident came days after viewers of Charles’ historic accession to the throne found themselves distracted when the he furiously gestured to one of his aides to remove a pot of ink.

The clip at Hillsborough Castle begins with Charles asking what the date was, as he prepares to sign a visitors book in front of cameras.

Venting his frustration as the pen begins to malfunction, the new King exclaims: ‘God I hate this [pen]’ as he hands it over to the Queen Consort.

He adds: ‘I can’t bear this thing… every stinking time’.

The new monarch was visiting Northern Ireland on the latest leg of his royal tour of the United Kingdom in the wake of the death of his mother, Queen Elizabeth II.

Charles enjoyed an emotional first trip to Northern Ireland as the new monarch after he and the Queen Consort inspected a remarkable show of flowers and were met with roars of approval as the people of Belfast today greeted their new sovereign with open arms.

The royals’ trip began with deafening chants of ‘God Save the King’ as they exited their blacked-out BMW to meet adoring crowds on the latest leg of their royal tour of the United Kingdom on Tuesday.

From official dignitaries to GirlGuides and Scouts to local residents, Charles and Camilla charmed all in their path; warmly grabbing onto outstretched hands, accepting bouquets of flowers and speaking with those who had patiently waited hours to meet them.

A local corgi, famously his late mother’s favourite breed of dog, was even seen snuggling up to King Charles as he shook hands with well-wishers, before he received a 21-gun salute as they entered the grounds of Hillsborough Castle – the province’s official residence of the reigning monarch and members of the Royal Family.

It comes days after viewers of Charles’ historic accession to the throne found themselves distracted when the new monarch suddenly gestured furiously to one of his aides to remove a pot of ink.

As he went to sign the historic Proclamation, the King frantically motioned to an aide to move a pen box from his desk, which viewers described as ‘far too small’ for the huge document and stationery.

Despite the gravity of the moment, viewers could not help but find the apparent difficulty the King had with the pen amusing.

Charles asked a nearby aide to get the box off the table so he could sign the second part of the large document.

The fountain pen set he used to sign the momentous document was a gift from his sons Princes Harry and William.

Some viewers joked the new King ‘stole’ the pen after spotting him put it in his pocket before taking it out again.