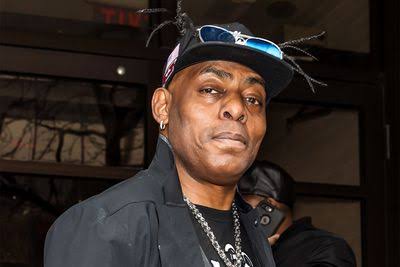 Gatekeepers News reports that the grammy-award winning musician died in the bathroom of his friend’s house in Los-Angeles on Wednesday.

Coolio’s manager, Jarez Posey, who spoke to TMZ said, “Coolio went to the bathroom at his friend’s house, but when he didn’t come out after a while, the friend kept calling for him and eventually went in and found Coolio laying on the floor.”

Porsey said the paramedics arrived the friend’s house after he called, and pronounced Coolio dead on the scene.

He added that the paramedics suspect he suffered cardiac arrest although an official cause of death had not been determined.

The rapper was famous in the 90’s for his hit song ‘Gangsta’s Paradise’ which was used as the soundtrack of ‘Dangerous Minds,’ a Michelle Pfeiffer film.

Meanwhile, stars including Michelle Pfeiffer and Snoop Dogg have been paying tribute to the US rapper.

Coolio won a Grammy for the 1995 track Gangsta’s Paradise, which led the soundtrack to the film Dangerous Minds.

Pfeiffer, who starred in the movie, said she was “heartbroken” at the news.

On the other hand, Snoop Dogg referenced the track in his tribute to the late star online, while sharing a picture of himself and Coolio posing on the set of the music video for Gangsta Walk – a track they collaborated on in 2006.

Fellow rapper and actor Ice Cube said, “This is sad news. I witness first hand this man’s grind to the top of the industry,” while Vanilla Ice tweeted: “I’m freaking out I just heard my good friend Coolio passed away.”

MC Hammer described Coolio as “one of the nicest dudes I’ve known”.

In this article:Coolio, Gatekeepers News