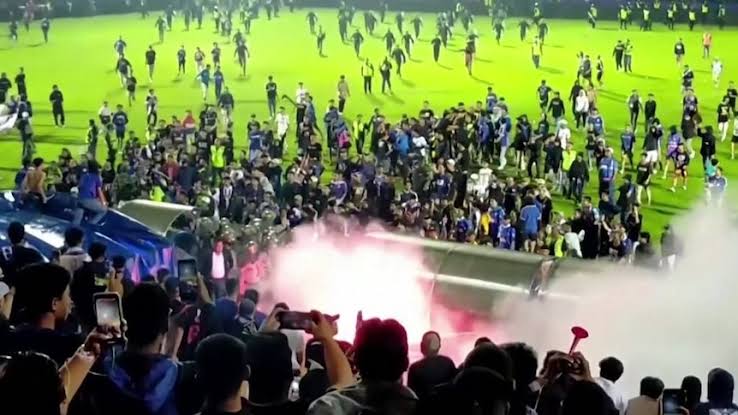 No fewer than 174 people have been killed and dozens more injured in a riot and a stampede that occurred at an Indonesian football stadium on Saturday night.

Gatekeepers News reports that the incident thatthe Police in East Java province said thousands of fans of Arema FC stormed the pitch at Kanjuruhan Stadium after their team lost 3-2 to Persebaya Surabaya.

Officers tried to control the “riots” by firing tear gas, triggering a stampede as panicked fans rushed to an exit gate.

Many were trampled to death while some suffocated in the chaos. At least 34 people, including two police officers, died at the stadium.

East Java’s Vice Governor Emil Dardak on Sunday afternoon confirmed that the death toll has risen to 174, while more than 100 injured people were receiving intensive treatment in eight hospitals. Eleven of them were in critical condition, he said.

A hospital director told local television that one of the victims was five years old.

The stadium holds 42,000 people and authorities said it was a sell-out. Police said about 3,000 people had stormed the pitch. Vehicles outside the stadium were also torched, including at least five police cars and trucks.

“Officers fired tear gas, and automatically people were rushing to come out, pushing each other and it caused many victims,” a 43-year-old spectator told the AFP news agency. “Nothing was happening, there was no riot. I don’t know what the issue was, they suddenly fired tear gas. That’s what shocked me, didn’t they think about kids, women?”

Meanwhile, President Joko Widodo has ordered an investigation into the tragedy, a safety review into all football matches and directed the country’s football association to suspend all matches until “security improvements” were completed.

“I deeply regret this tragedy and I hope this football tragedy will be the last in our country,” Widodo said.

FIFA President Gianni Infantino said the the football world was “in a state of shock”.

“All our thoughts and prayers are with the victims, those who have been injured, together with the people of the Republic of Indonesia,” he added.