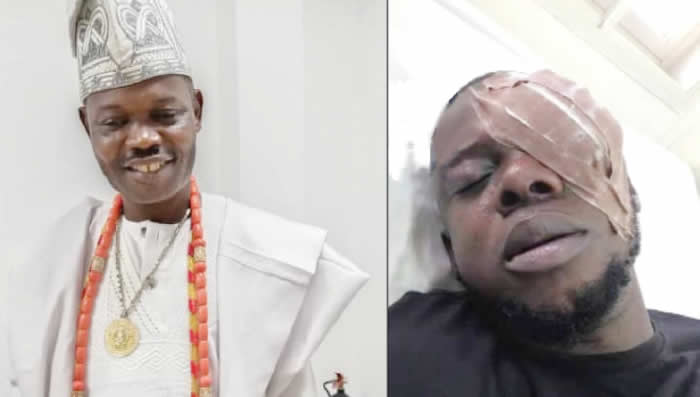 A traditional ruler in Ogun State, Nureni Oduwaye has allegedly left a trader blinded after he kicked his eye at the Moore Blessing Hotel, Ikenne, in the Sagamu Local Government Area of the State.

Gatekeepers News reports that the victim, Wasiu Oduwole claimed he could no longer see with the eye.

Oduwaye was said to have perpetrated the act after reportedly accusing Wasiu of dancing with his queen during a birthday celebration at the hotel.

According to Punch Metro, the monarch, his queen, alongside other guests, were invited by the celebrant, identified simply as Iya Alaje.

Wasiu told the medium that before the celebration commenced, the owner of the hotel, Yakub Omobolanle, contracted him to prepare 14 plates of catfish pepper soup for the guests.

The trader said he had visited the hotel to commence preparation when he realised that the ingredients for the pepper soup were not enough.

“So, I decided to manage the ingredients because the distance of the hotel to the market is far. We were serving the guests when the owner of the hotel and the celebrant approached me and said the guests were complaining that the pepper soup was not well-nourished.

“I told him it wasn’t my fault and that the ingredients were not enough. After I was done with the cooking, I went into the bar, met the owner of the hotel, the celebrant, Iya Alaje, her husband, and a woman, who I never knew was a queen. I started apologising to them and I was told not to worry.

“The celebration was ongoing when the monarch, Nureni Oduwaye, entered. The deejay was playing and everyone was dancing. I was surprised as the celebrant and the queen were singing secular music. I commended them because people of their age and status don’t usually like secular music, let alone knowing the lyrics,” Wasiu said.

The Ogun State indigene said suddenly, the monarch asked him to identify himself and he said he was the younger brother of the owner of the hotel.

He claimed that the Oduwaye angrily left for his car, adding that the hotel owner and the husband of the celebrant ran after him, but Iya Alaje’s husband returned and instructed him to apologise to the monarch.

Wasiu said, “The queen was even asking what I did wrong but for the sake of peace, I went to apologise to him. When I got to where he was, I started begging him. I told him I was informed that he was annoyed because I was dancing with his queen and said I did not dance with her.

“As I was attempting to lie down to continue begging, he used his leg to kick my left eye. The injury in my eye was so severe that I was rushed to a nearby hospital from where I was transferred to the Olabisi Onabanjo University Teaching Hospital.

“The monarch only checked on me once and as I am speaking to you, I can no longer see with my left eye. I am blind in my left eye. The case was reported at the Area Command, Sagamu, but nothing was done because the police refused to carry out an investigation. The incident happened on September 21, 2022; I want justice.”

Wasiu’s mother, Shakirat, accused the Sagamu Area Commander of attempting to sweep the case under the carpet, adding that the monarch was using his influence to prevent justice.

She said, “When I saw my son in the hospital, I almost fainted. I was advised to report the case to the Area Commander, Sagamu, and when we got there, I was crying and explaining to him, but he said we would have to settle the case.

“He said he is the son of a king and the person responsible for my son’s condition is also a king and for that reason, we have to settle the case. I am speaking up because I want justice for my son; the police have refused to carry out any investigation.”

The owner of the hotel, who confirmed the attack on Wasiu, said the monarch had been acting unremorseful.

Omobolanle said, “When I was told that the monarch became angry because Wasiu was dancing with his queen, I had to tell him that I was the one who invited Wasiu to prepare the catfish and that he does not know his queen. He was just acting annoyed. The husband of the celebrant told Wasiu to beg the monarch and it was in the process of begging that the monarch kicked his eye.

“I was the one that rushed him to a hospital and paid the hospital bill. I have been told that Wasiu no longer sees with the eye.”

Oduwaye, when contacted, said he had visitors and could not talk to our reporter.

“You must come to Shagamu if you want to hear the facts from me,” he added.

He said, “The area commander confirmed that the case was reported and that it had been investigated and concluded. He said the case should have been charged to court on Monday but the monarch said he was sick and came in the evening.

“So, he told both parties to come on Wednesday so the matter could be charged to court but the complainant did not show up. If the complainant shows up, we will charge the case to court.”