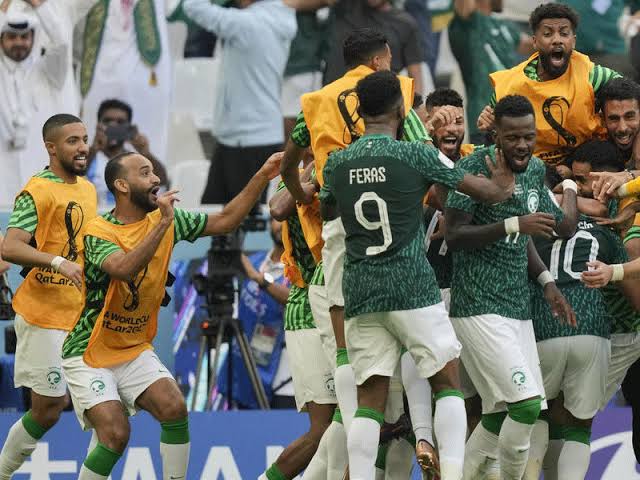 Saudi Arabia have started their Qatar 2022 campaign bold and brilliant after pulling off one of the biggest shocks in World Cup history as they came from a goal down to stun two-time winners Argentina in a fantastic Group C opener in Lusail.

Gatekeepers News reports that aside Lionel Messi’s opening goal from the penalty spot for the Argentines, they further scored three goals which were ruled out for offside.

The 51st-ranked Saudi Arabia flipped the game on its head in a stunning 10-minute period after half-time, Saleh Al Shehri levelling with a low effort, followed by Salem Al Dawsari firing them ahead to spark pandemonium in the stands.

Having gotten their lead, they demonstrated a ruggedness by holding a stellar Argentina front line at bay to secure only their fourth World Cup win and throw the group wide open.

Argentina need to double their efforts to keep the hope of a first global triumph alive since 1986 and to give Messi a fitting ending to what is very likely his World Cup swansong.

They are now arguably the victims of the biggest shock in World Cup history, up there with England’s loss to the United States in 1950 and West Germany losing to Algeria in 1982.

On the other hand, the last three teams to beat Argentina at the World Cup have gone on to win the competition (Germany in 2014, France in 2018) or reached the final (Croatia in 2018), raising the expectations of the Green Falcons.