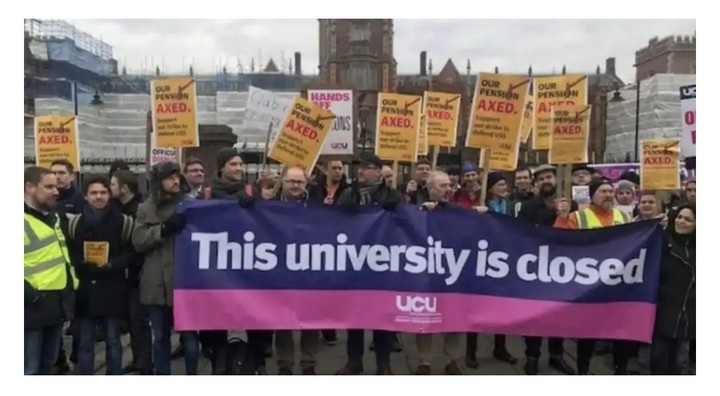 University staff in the United Kingdom are walking out on the first of three days of strikes over pay, working conditions and pensions.

Gatekeepers News reports that lectures could be called off at 150 affected universities.

The National Union of Students is supporting the strikes, but some students are concerned about missing classes. Universities say they are putting measures in place to mitigate the impact on students’ learning.

The Universities and Colleges Employers Association (UCEA) said the impact of the strikes on students had been “low and isolated”.

Over 70,000 staff will be taking part in the strikes, which also take place on Friday and next Wednesday, according to the University and College Union (UCU).

UCU General Secretary, Jo Grady called it “the biggest strike action in the history of higher education”, with the union estimating that 2.5 million students could be affected.

“University staff… have had enough of falling pay, pension cuts and gig-economy working conditions – all whilst vice-chancellors enjoy lottery win salaries,” she said.

She said the further disruption could be avoided if concerns were “addressed with urgency”, and added that, if not, “even bigger action” would follow next year.

The UCU is demanding a pay rise of inflation (RPI) +2%, or 12%, whichever is higher, as well as an end to zero and temporary contracts and action to tackle “excessive workloads”.

The dispute over pensions has been rumbling on for more than a decade, and was reignited by what the UCU said was a “flawed” valuation of a pension scheme used by academic staff.

It said the average member “will lose 35% from their guaranteed future retirement income”.

Prof Steve West, President of Universities UK and Vice-chancellor of UWE Bristol, said the scheme “remains one of the most attractive private pension schemes in the country”.

He said students may be worried by further disruption, adding: “Universities are well prepared to mitigate the impact of any industrial action on students’ learning, and we are all working hard to put in place a series of measures to ensure this.”

“Strike action does not create new money for the sector,” he added.

Chloe Field, Vice President for higher education at the National Union of Students, said it was supporting the strikes because “staff working conditions are students’ learning conditions”.

Higher education minister Robert Halfon said it was “hugely disappointing” that students would face further disruption, and urged “all sides to work together”.

The University of Sussex said it was “very concerned” about its students, and that measures to “minimise the impact of the strike” included rescheduled teaching and extra materials.

University of Sheffield UCU branch president Dr Robyn Orfitelli, 38, who teaches linguistics, dreamed of being an academic since she was eight but is frustrated by changes in recent years.

“More and more every single year, it feels like we are having to just fight to even be allowed to do our jobs – and people are breaking,” she said.

Short-term contracts were pushing “more and more work on to a smaller group of people” on permanent contracts. And her workload meant she struggled to manage research, teaching and pastoral care

“In reality, my day-to-day job involves a lot of emails and doing a lot of paperwork for the university, just to enable me to do all of those other things,” she said.