Facebook has announced that former President of the United States, Donald Trump will remain banned till January 2023.

Gatekeepers News reports that Facebook had suspended Donald Trump from its service after he made comments on social media that rallied his supporters, who stormed the U.S. Capitol on Jan. 6.

The social media giant said the former U.S President suspension from the service would last for about two years, keeping the former president off mainstream social media for the 2022 midterm elections.

“Given the gravity of the circumstances that led to Mr. Trump’s suspension, we believe his actions constituted a severe violation of our rules which merit the highest penalty available under the new enforcement protocols,” Nick Clegg, the vice president of global affairs at Facebook, wrote in a company blog post. 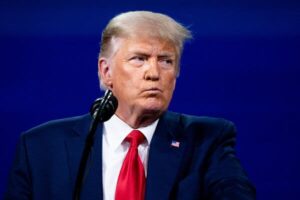 Gatekeepers News reports that Facebook noted that the former U.S President would be eligible for reinstatement in January 2023, before the next presidential election. It will then look to experts to decide “whether the risk to public safety has receded,” Facebook said.

If Trump’s suspension is eventually lifted, Clegg stated that, “there will be a strict set of rapidly escalating sanctions that will be triggered if Mr. Trump commits further violations in future, up to and including permanent removal of his pages and accounts.”

The technology company also said it would end a policy of treating posts from politicians differently from those of other users.