Gatekeeper News reports that an ‘instigating’ tweet from Nnamdi Kanu, leader of the Indigenous People of Biafra (IPOB), a separatist group agitating for the Republic of Biafra, has been deleted on Saturday.

Kanu, in the tweet, swore to unleash terror on Nigerian soldiers deployed to the South-east and also used derogatory words to describe some government officials.

“It’s not for the living to respond to the dead but given the lack of reasoning prevalent in the #Zoo Nigeria, I wish to assure @GarShehu (Garba Shehu), the Jihadi midget @elrufai (Nasir El-Rufai) & that Fulani lapdog Femi Adesina that any army they send to #Biafraland will die there. None will return alive,” Kanu had tweeted on Wednesday. 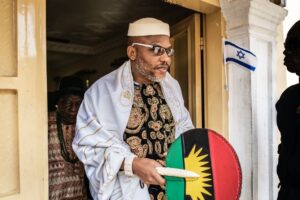 Garba Shehu and Femi Adesina are presidential aides while Nasir el-Rufai is the current Governor of Kaduna State.

Gatekeepers News had earlier reported that deletion comes barely a day after the Nigerian Government suspended the activities of Twitter in Nigeria for undermining the country’s corporate existence.