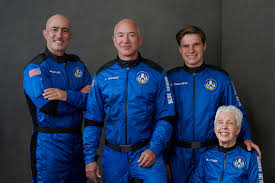 Blue Origin has completed its first mission on Tuesday.

Gatekeepers News reports that Blue Origin has completed its first mission after its founder Jeff Bezos and his three crewmates successfully landed after embarking on a 20-year in the making mission.

The mission is a huge milestone for Blue Origin, which was founded in 2000, as Tuesday’s launch marked the first time one of the company’s New Shepard spacecraft carried people.

The lift-off which was slightly delayed came at 1312 GMT from a remote facility in the west Texas desert called Launch Site One, some 25 miles (40 kilometers) north of the nearest town, Van Horn.

After lift-off, New Shepard which was full of other firsts: at 82, Funk is the oldest person ever to fly in space, and at 18, Daemen is the youngest lurched towards space at speeds exceeding 2,300 mph (3700 kph) using a liquid hydrogen-liquid oxygen engine whose only byproduct is water vapour.

Today’s milestone mission is launching on the 52nd anniversary of the Apollo 11 moon landing — July 20.

Blue Origin’s CEO, Bob Smith, said, “It’s thrilling to get to this day, and I’m so proud of Team Blue. After 15 flights of New Shepard, we are ready to fly our first crew, including our first paying customer, Oliver Daemen.”

Bezos after the spaceship touched down following a 10-minute hop to the Karman line and back said, “a very happy group of people in this capsule.”

The four-member crew at the landing site exchanged high-fives and hugged family who came to meet them.