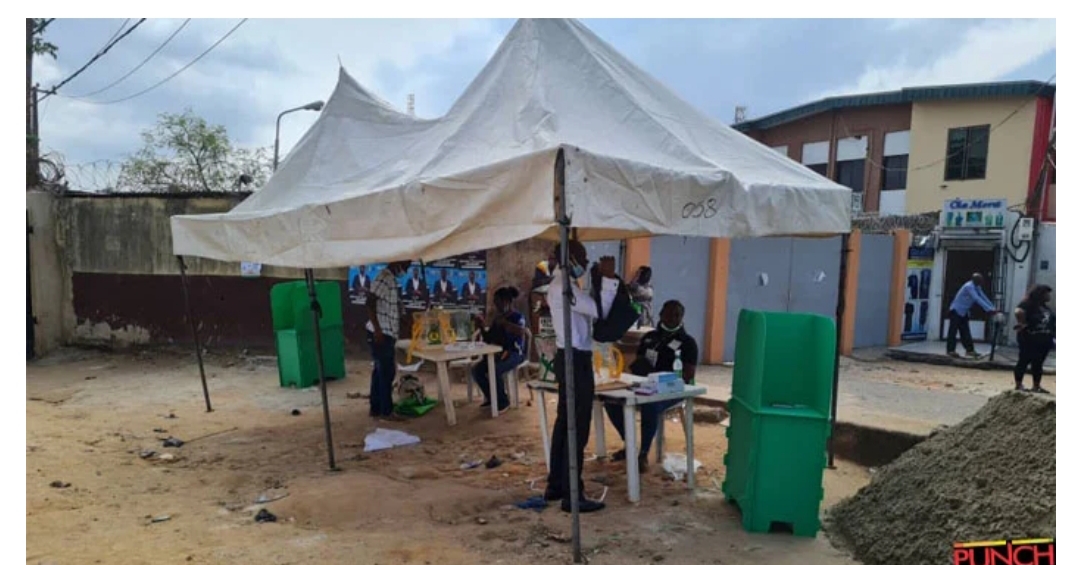 Low turn out of voters on Saturday marked the Local Government election in Lagos.

Gatekeepers News reports that there was low turnout of voters in many polling units visited in Badagry, Alimosho, Epe, Mushin and Odi-Olowo Local Government Councils.
At the Awhajigoh Ward C in Badagry, the electoral officers, who arrived at 8. 20 a.m, wearing face masks and gloves, came with two bottles of sanitisers, urging the voters to observe the COVID-19 guidelines.
A voter in Awhajigoh Ward, Mr Monday Avoseh, said the low turnout was due to the voter apathy in the Badagry Area.
According to Avoseh, voters should come out before 3 p.m to cast their votes.
At Ajara-topa Ward C, Mr Babatunde Hunpe, the lawmaker representing Badagry Federal Constituency in the House of Representatives, said that it was not too late for voters to cast their votes.
Also, at Polling Unit 038A, Baruwa Road, Ward 07, Ipaja North in Aliomosho Local Government 03, the election commenced at about 9.30 a.m.

The officials of the Lagos State Independent Electoral Commission (LASIEC) arrived at the centre around 8.30 a.m, while election materials were delivered at about 9.05 a.m.
APC Party Agent, Mr Ahmed Baruwa, told disclosed that the election commenced at the centre at 9.30 a.m.
Baruwa explained that voters had started casting their votes but the card readers were have been functioning well.
“The card reader has not been working since the election started, so the LASEIC officials have resorted to using the voters list to verify with the information on the voter card, so that voters can vote,” he said.
The APC party representative expressed worry about the poor turnout of voters for the election.
“The turnout is poor and less impressive but since the election has just started, we are hopeful that the situation will improve before the end of the election,” he said.
PDP Party Agent at the ward, Mrs Arike Oni, said although the election had started, she could not give an account of the process because she just came.

A voter, Mrs Folake Bewaji, lauded the process of the election so far, as it had been smooth and peaceful.
Bewaji said since the election had started, one should not conclude that the turnout is low until the end of the election.
“The election has just started, maybe people thought that there will be a crowd, so they are taking their time.
“Likewise, I also thought that there will be a crowd, so I stayed back until I saw people who left to vote, coming back almost immediately, so I decided to come and cast my vote.
“This situation is normal when it comes to elections, she said.

Meanwhile, the LASIEC officials at the polling units confirmed that they got to the centre at about 8.30 a.m.
Voters were seen in few numbers at the centre and other centres around, while the COVID-19 and social distancing protocols were enforced by the security personnel.

Gatekeepers News reports that at the time of commencement of voting, there was low turnout at the polling booths.
Also, all COVID-19 protocols put in place by LASIEC officials were strictly observed by the electorate before they were allowed to cast their votes.
In Epe, accreditation began at Polling Unit 003, Ward D at 8 a.m. at Dispensary Unit, Opposite High Court, Epe.
The Polling Officer disclosed that 689 voters registered but so far only 20 eligible voters had been accredited.
He added that the turnout of voters was low.

At Mushin and Odi-Olowo, few hours after the commencement of Local Government and Local Council Development Areas elections in Lagos, the exercise was characterised by the late arrival of voting materials and low turnout of voters.
At polling units in Atewolara, Babalosa and Atewolara in Mushin LG, the few voters available complained of the late arrival of voting materials.
Similarly in Odi-Olowo LCDA, many of the polling booths at Ilupeju, Kayode/Fadeyi were virtually a handful with voting materials arriving late.
Several voters complained that they were not aware of the election.
“We were only knowing about it this morning,’’ most of them said, as they continued to complain.
Some soccer lovers ceased the opportunity of the empty streets to turn the empty roads into football pitches.

However, there were security operatives such as the Mobile Police, Civil Defence Corps officials, on major roads, to prevent breakdown of law and order and carry out the restriction order of the state government.
In most of the polling units visited, LASIEC officials observed the COVID-19 protocols by insisting that voters wear their facemasks.