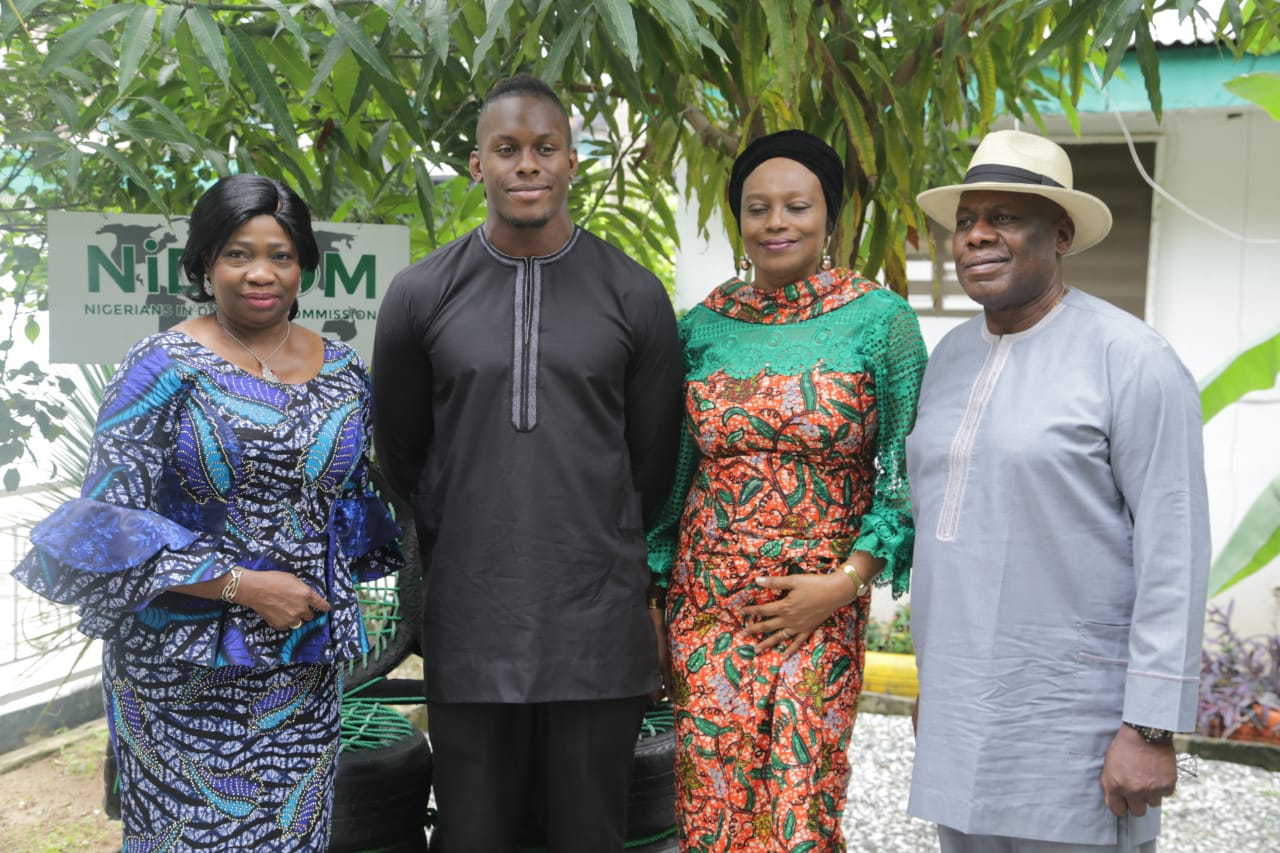 Gatekeepers News reports that the Chairman/Chief Executive Officer of NIDCOM, Abike Dabiri-Erewa has commended the young Nigerian for being a good ambassador of the country.

The NIDCOM boss gave the commendation when she hosted Itoje and his parents at a reception at the NIDCOM liaison office in Lagos.

Dabiri-Erewa said she was particularly thrilled by the art exhibition which Maro Itoje had in London.

She said, “With the History Untold exhibition, he tried to tell Nigerians and Africans generally about their history and for the younger ones to know their roots.”

The NIDCOM boss added that Commission would team up with Itoje in his future programmes.

“For us at the Commission, we would like to work with you, in every sense of the word. We have programmes like the Door of Return, which takes place in Badagry every year, the Diaspora Day, which is on July 25, among other numerous programmes.”

England international rugby star, Maro Itoje in reaction to this, pledged to commit his time, resource,s, and expertise to better the lives of the underprivileged in Africa and Nigeria, in particular.

Itoje noted that he had never lost touch with Nigeria, adding that he visits the country occasionally.

He said, “My last visit to Nigeria was in 2018 and I am championing the African cause in England with my art. I organised an art exhibition tagged
‘History Untold’ recently and it was a huge success.”

According to him, “A History Untold” which is the theme of his most recent exhibition was a deliberate attempt to telling Africa’s story from an African perspective.

Itoje said, “All we have been told by Europeans about Africa has been negative. They tell you about the slave trade, coups, disease,s and so forth. So, the whole essence of History Untold is to celebrate the power of Black history, African history that has not been told to us. It is an attempt to tell that untold story, to tell the other side of the coin.”

He, therefore, pledged to commit his resources to the development of the nation and noted he was prepared to team up with the commission to add to the progress that had already been made.

While commenting on making rugby popular in Nigeria, Itoje said the sport was still very small in the country but there was a lot of potentials.

He added that “Judging by the amount of Nigerians in the diaspora who play rugby, it goes to show how we are naturally built for the game. We have the natural talent and ability for the game, so back home there is a lot of
potential and possibilities abound.

“So I will be happy to lend a helping hand to see the game grow in
Nigeria.”

In this article:Gatekeepers News, Itoje, NIDCOM