Festus Alenkhe, a Crime correspondent of Edo Broadcasting Service (EBS), reiterated his support for the state-owned Bendel Insurance Football Club as he presented a cash gift to the team member.

Gatekeepers News reports that Alenkhe presented a cash gift of N20,000 to Ojo Tolulope, the scorer of the first goal of the last home match for the football season played at the Samuel Ogbemudia Stadium, Benin City weekend.

Bendel Insurance FC played against the Crown Football Club of Ogbomosho which by four goals to nil.

Gatekeepers News reports this is the third time Alankhe will be presenting a cash gift to scorers of the first goal in every home match as he had promised. 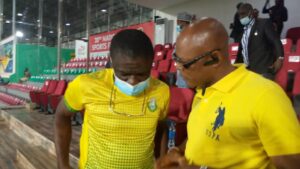 Alenkhe vowed to sustain his motivational support for the state-owned Football Club in order to continue to bring sports glory to the State.

According to him, there was nothing too big to motivate a team that was doing the State proud with quality play and positive results.

He noted that while the State government was trying its best, other stakeholders also need to support sports development in the State.