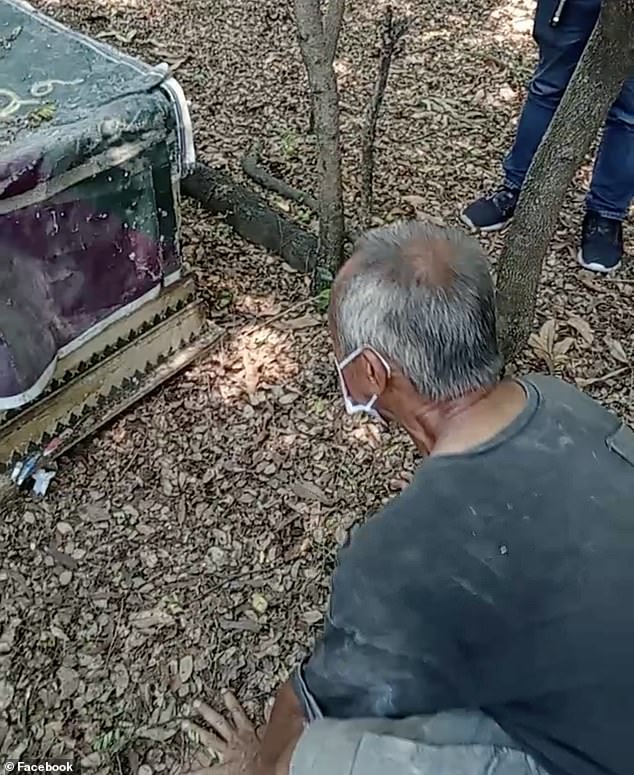 An elderly Thai man, Charn Janwatchakal who kept the body of his dead wife in a coffin for 21 years in the room where he slept has finally cremated them.

Gatekeepers News reports that the 72-year-old bade farewell after his wife’s remains in a distressing video.

He watchesd on as charity workers retrieve the rotting coffin from the dingy space, surrounded by plastic bags and other rubbish in the Bang Khen district of Bangkok.

The widower a former medic in the Royal Thai Army, had requested the assistance of the Phet Kasem Bangkok Foundation to cremate his wife, who died from a congenital disease in 2001.

In the footage, taken on April 30, the workers first carefully remove the coffin from the ramshackle single-storey property.

He then sits on the ground and stares, while reaching out to touch it, Janwatchakal was overcome with emotion.

The workers rip off the decaying wooden lid to reveal the woman’s blackened skeletal remains, which they wrap in cloth lining to transfer to a newer casket.

While in tears, Janwatchakal touches the corpse one more time before it is gently laid to rest in the ornate coffin – and puts his hands together in prayer.

In this article:Cremates, Gatekeepers News, Man Who Shared Room With Wife's Body For 21 Years