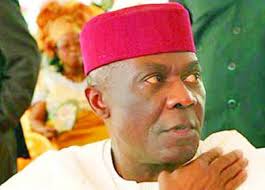 When the news of Senator Arthur Nzeribe’s death broke out, I was detailed by my COO Mr Taheer Momodu to work on the news. While writing the story, I knew the name sounded familiar but I couldn’t immediately remember circumstances surrounding the name.

While publishing the story, I remember in pronto that he was the man whom the Maradona of Nigeria politics, Ibrahim Badamasi Babangida and his co-conspirators nay man friday used to steal the late Ogun born philanthropist Moshood Kashimawo Abiola’s mandate in 1993.

I wasn’t born in 1993 but I grew up to meet how Nigerians revered MKO Abiola even in death and it was always a delight then in high school looking forward to June 12 as a national public holiday — Another day to sit at home and play football with my friends.

Later, I had to quiz my mum and also read about the man, what he stood for and why he was so highly revered among Egba people of Ogun State, South West Nigeria.

In 1989-1980, when Babangida, the then military head of state announced transition into a civilian government after so much dillydallying, two political parties were created; The Social Democratic Party, SDP, and the Nigerian Republican Congress, NRC, — One to the left and the other to the right.

Abiola emerged as the candidate of the SDP and picked a Muslim northener, Babagana Kingibe from Borno State as running mate as against the military establishment choice of Pascal Bafyau, a Christian as his running mate, little did Abiola know that he had stirred the hornets’ nest by picking Kingibe.

With Abiola’s choice of Kingibe, Babangida and the military oligarchy were no longer interested in the election, unbeknownst to Abiola who was at the time, a close associate of Babaginda.

On the eve of the election, Senator Arthur Nzeribe, a senator in the aborted second republic with his man Friday, Abimbola Davies with a group ironically named Association For A Better Nigeria, ABN, swung into action collating fractious and manufactured signatures and approached the court seeking an injunction to stop the election.

All what mattered to Nzeribe was that the poll mustn’t hold the next day, he was reported to have said in an interview that “If Babaginda goes, the country will break into pieces” and a compromised judge in the midnight gave a verdict stopping the election.

The election went as planned and Abiola was already coasting home to victory, even defeating his rival Bashir Tofa in his homestead Kano State, North West Nigeria.

Three days after the election, while votes were being counted and collated, Nzeribe whose earlier Injuction didn’t stop the election approached the court immediately and obtained another Injuction to halt the ongoing vote collation. By this time, it was clear that the late Abiola had won.

“In politics,” according to former American President, Franklin D Roosevelt, “nothing happens by accident. If it does, you can bet it was planned that way”, Babangida saw that as a perfect time and subsequently annulled the election.

Nzeribe was to later benefit from democracy as he was elected as a Senator representing Imo West between 1999-2007 and promoted the National Health Insurance Scheme, NHIS, which was established under NHIS act 2004 by the Olusegun Obasanjo led federal government.

In death, Nigerians never forgave him for his infamous role in the MKO Abiola’s presidential abacadraba — apologies to Olusegun Adeniyi — his prosperity and efforts meant nothing and he will be remembered as the conduit pipe that was used to sabotage the people’s will by the enemy of the people.

This should be a lesson, especially as we approach the 2023 general elections to our leaders to be people-centric, serve the people selflessly, touch lives, achieve results, be accountable, transparent, sincere, truthful and make the best use of resources at their disposal because posterity beckons.