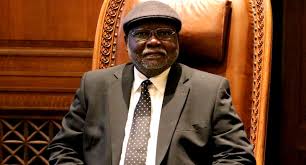 President Muhammadu Buhari is expected to swear Justice Olukayode Ariwoola as the new Chief Justice of Nigeria (CJN) today, barring any last-minute changes to the schedule.

Gatekeepers News reports that that this is coming after Justice Ibrahim Tanko Muhammad’s resignation due to health issues.

The most senior Supreme Court Justice and next in line is Justice Ariwoola.

His Lordship studied law at the University of Ife (now Obafemi Awolowo University), Ile Ife and bagged his bachelor of laws degree with honors in July, 1980. In July 1981, Olu Ariwoola was called to the Nigeria bar and got enrolled at the Supreme Court of Nigeria as a Solicitor and Advocate soon thereafter.

Justice Ariwoola was first appointed a Judge of Superior Court of record in Oyo State in 1992 from private legal practice. Before his elevation to the Supreme Court, he served as Justice of Court of Appeal in Kaduna, Enugu and Lagos Divisions.

He is next in rank to the retiring Chief Justice of the Federation, Justice Muhammad Tanko.

In this article:#Featured, Justice Kayode Ariwoola, Nigeria's Next Chief Justice