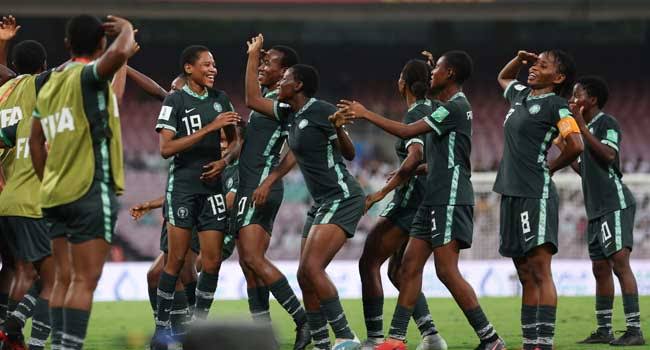 Nigeria’s U-17 women’s national team, the Flamingos defeated Germany 3-2 on penalties to claim their first-ever bronze medal at the U-17 Women’s World Cup.

Gatekeepers News reports that the Flamingos claimed this biggest achievement at their level of football, in India on Sunday.

The country had only managed to reach the quarter-final since the competition began in 2008.

Gatekeepers News earlier reported that Bankole Olowookere’s girls lost on penalties to Colombia while the Germans were edged by eventual champions Spain in the other last-four tie to set up the third-place clash.

Although the Flamingos were up 3-0, the Germans who had beaten them 2-1 in the group stage, staged a dramatic comeback late on to tie the loser’s final 3-3.

He said, “I am a very happy man; we did not leave India empty-handed. It has been a great tournament with a lot of lessons learnt. We give God the glory.”

On his part, the NFF president, Ibrahim Gusau, who was with the team in India from the quarter-final stage, said, “This is a victory for the government and good people of Nigeria. The girls and their technical and administrative crew did very well to win something from this tournament and give Nigerians joy. I commend their determination and commitment to a noble goal.”

Meanwhile, Super Eagles captain Ahmed Musa has promised a cash reward of N3 million to the Flamingos after their record-breaking performance.

The team is expected back in Nigeria on Tuesday.

In this article:Bronze, Gatekeepers News, Germany, Nigeria, U-17 WWC