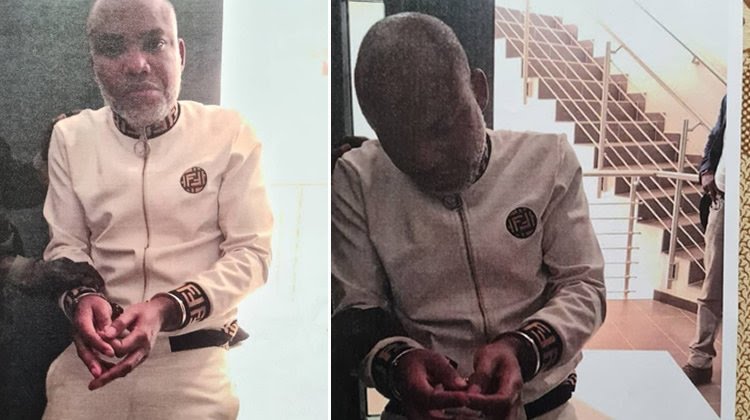 Gatekeepers News reports that the UN said it received information of various allegations of human rights violation against the leader of the proscribed Indigenous People of Biafra (IPOB), Nnamdi Kanu by the federal government of Nigeria.

In the document dated August 27, the UN wrote, “While we do not prejudge the accuracy of these allegations, we would like to express our concern in relation to the enforced disappearance of Nnamdi Kanu from June 19, 2021, until his reappearance at Nigerian federal high court in Abuja on June 29, 2021, and his reported illegal rendition from Nairobi to Abuja without judicial process.

“We are further alarmed by the alleged torture and ill-treatment Mr Kanu has been subjected to during his detention by the DSS in Nigeria. If confirmed, these allegations would constitute prima facie violations of fundamental human rights, including the right not to be arbitrarily deprived of liberty and the absolute and non-derogable prohibition of torture and other ill-treatment under the International Covenant on Political and Civil Rights.

“The Committee against Torture and the UN Human Rights Committee has repeatedly concluded that enforced disappearances may amount to torture and other forms of ill-treatment both with regard to the disappeared and with regard to their family members, due to the anguish and uncertainty concerning the date and whereabouts of loved ones.”

The UN asked the Federal Government of Nigeria to provide information on Kanu’s current health status, details of his extradition, and charges instituted against him.

The document further read, “Please provide detailed information on the current state of health of Mr Kanu and the measures undertaken, or foreseen, to prevent any irreparable damage to his life and personal integrity and to ensure that he has access to the medications and medical treatment required by his health conditions.

“Please provide detailed information on the circumstances in which Mr Kanu was arrested, forcibly disappeared before being handed over to Nigerian authorities, and transferred from Nairobi to Abuja. Also provide any international arrest warrant that may have been issued against him, prior to his arrest.”

The International organisation also asked the Kenyan government to “provide full information on the period between 19 – 29 June 2021, during which Mr. Kanu was subjected to enforced disappearance, including his whereabouts and the conditions in which he was held, on the informal detention facilities during this period and explain how this is compatible with the international human rights obligations of Kenya”.

“Please provide information on whether an investigation was carried out into the alleged enforced disappearance of Mr. Kanu during this period of time, and whether those responsible have been held accountable.

“Please provide detailed information, where available, on risk assessment carried out by the Kenyan authorities to ascertain the risk Mr. Kanu may incur, including being subjected to torture or cruel, inhuman or degrading treatment or punishment as well as arbitrary detention upon his extradition to Nigeria, and how this assessment is compatible with the international standards.

“Please provide information on the measures taken to investigate the above-mentioned allegations of torture and ill-treatment perpetrated against Mr. Kanu during his detention in Kenya and to hold those responsible accountable.”

The permanent mission of the Federal Republic of Nigeria to the United Nations Office and other international organisations in Geneva acknowledged receipt of the letter on September 17.

In its response, the mission wrote, “The permanent mission wishes to inform that the Joint Urgent Appeal has been forwarded to its headquarters for necessary action and any response would be transmitted as soon as received.

“The permanent mission of the federal republic of Nigeria to the United Nations Office and other International Organizations in Geneva avails itself of this opportunity to renew to the Office of the High Commissioner for Human Rights (Special Procedures Branch) the assurances of its highest consideration.”