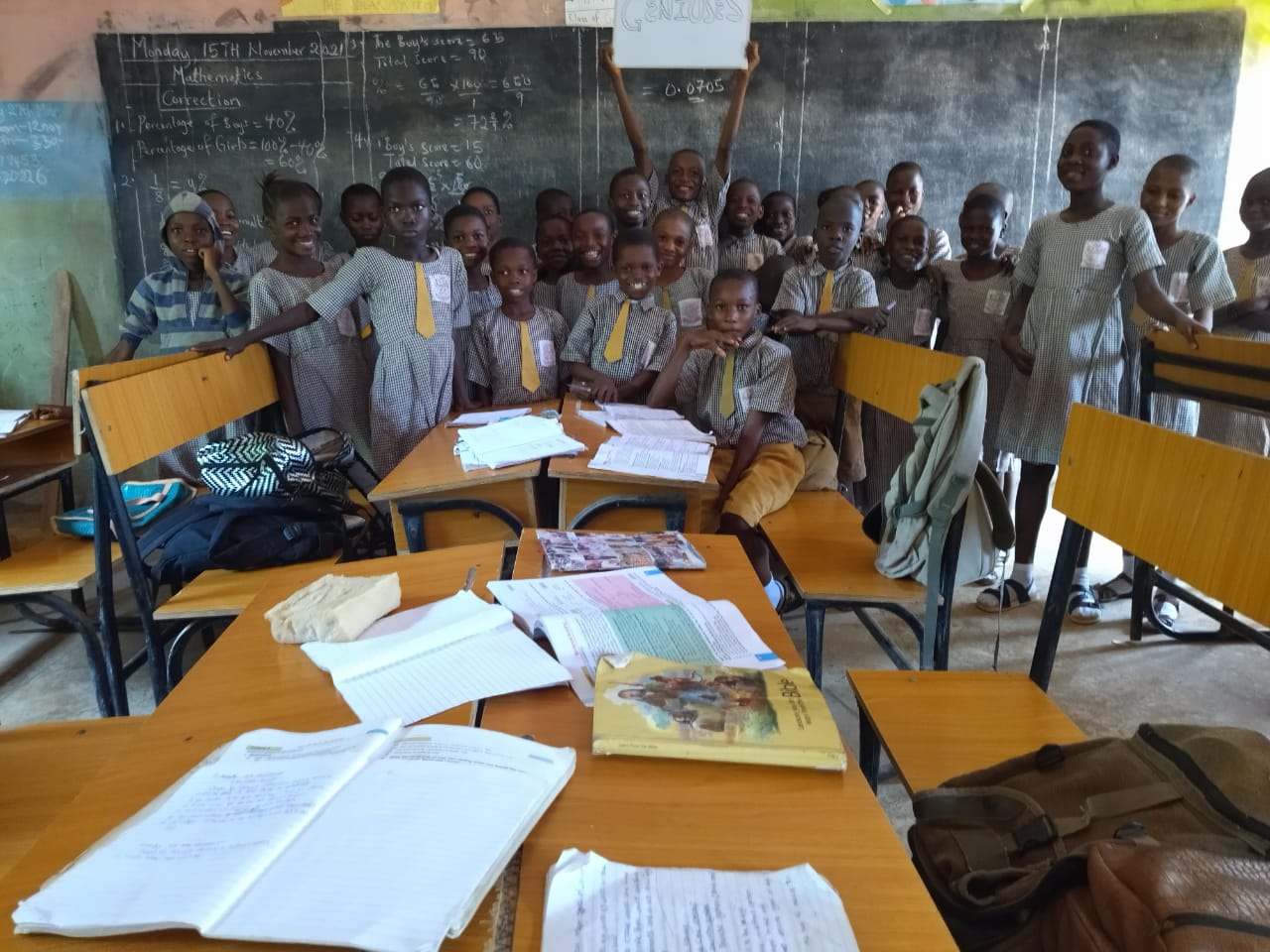 Education is the tonic that drives innovation in the world and no nation builds without its educational institutions at their best levels. Across the world, primary education is considered the bedrock of knowledge as it is earned in the formative years of a child’s life.

In Nigeria, many kids don’t get a chance to have that foundation for projection into the future. Across the country, thousands of young pupils are driven out of the classroom, for the fear of the unseen danger or the unannounced chaos. For some parents, it’s a subject that sparks disinterest, regardless of the child’s desires. In some Nigerian communities, it’s simply a result of a lack of access. The problems in their cumulative state are worrisome.

According to the United Nations Children Education Fund (UNICEF), at least one in five of the out-of-school children in the world is in Nigeria. “All children, no matter where they live or what their circumstances, have the right to quality education, ” the organisation says.

Using statistics to paint current realities doesn’t make for a piquant stew but they’ll be told, regardless of how uninspiring they seem to be.

There are at least 10-13.5million of the children aged between 5 and 14 that are out-of-school in Nigeria. At least 61% of those aged between 6-11 are attending primary schools regularly. For children aged between 36-59 months, only 35.6% of them receive early childhood education. The numbers leave a sour taste, and this is what 26 year-old Nigerian, Taofik Babatunde Soboyejo felt compelled to change – at least in his way.

When Taofik had an opportunity to be a part of a fellowship programme, Teach for Nigeria, he took it with both hands. It was the perfect vehicle of impact for him, and he would give it all it takes, to make a visible difference wherever he finds himself.

Born and raised in Sagamu, Ogun State, Southwest Nigeria, Taofik comes from a family that takes education with great importance. It is the least choice a child has in his family. He grew up seeing his elder siblings and cousins making their way to school and when he started his journey many years ago, he never for a day stopped enjoying it. The problems of those 10.5 million kids are not totally relatable to him, as he attended one of the best primary schools in his native, Sagamu, but the struggle of many others around him was clear. He’s always wanted to make an impact. When the Teach for Nigeria fellowship programme came up, he had a perfect pedestal to make a bigger impact.

“As fun as teaching is, it can be quite exhausting,” he said. He’s an exciting teacher to the kids and they all see him as their friend. Always willing to talk to him about their struggle, and child-like challenges.

“It’s exhausting, but I love the thrill of watching my students’ eyes light up at the thought of learning something new, ” he told me in a chat.

Taofik started at Christ Anglican Primary School Ìwáde, Ijebu-Ife, Ogun State looking at pupils who needed to be helped. The programme was made progressively as he’s opportune to teach the pupils for some time, and move with them as they get promoted to a higher class too. They are now in Primary 6, and has achieved so much, one year since taking them up. For his set of the fellowship, the pandemic made them start behind schedule but he has ensured the time lost has been regained in fun and impacting knowledge on the kids. Teaching, unlike what it is for youths today – a last-ditch attempt at survival, was a choice for the Microbiology graduate of the Federal University of Agriculture, Abeokuta who also works as a digital marketer, bibliophile, and storyteller.

“Teaching was a choice for me. I’m passionate about education – digital and traditional. I was also inspired by a friend. I used to check all the things she did on her status and I’ve always had a flair of being able to easily explain stuff to people and she said it too, ” he said.

During his compulsory national youth service year in Port Harcourt, Tunde taught in a secondary school and that helped his teaching and love for impact. Before joining the fellowship, he wrote on a freelance level and worked part-time with someone. He also added that a dose of “breakfast” – which is now Nigeria’s youth parlance for heartbreak was served at the time. He had to pour his heart somewhere and those kids became his happy place.

On how he helps the kids become better at what they do, he said the main classes they have are not enough for bonding or impacting the knowledge he desires. That made him organize extra lessons for them, with the approval of their parents and they’ve shown him great support. 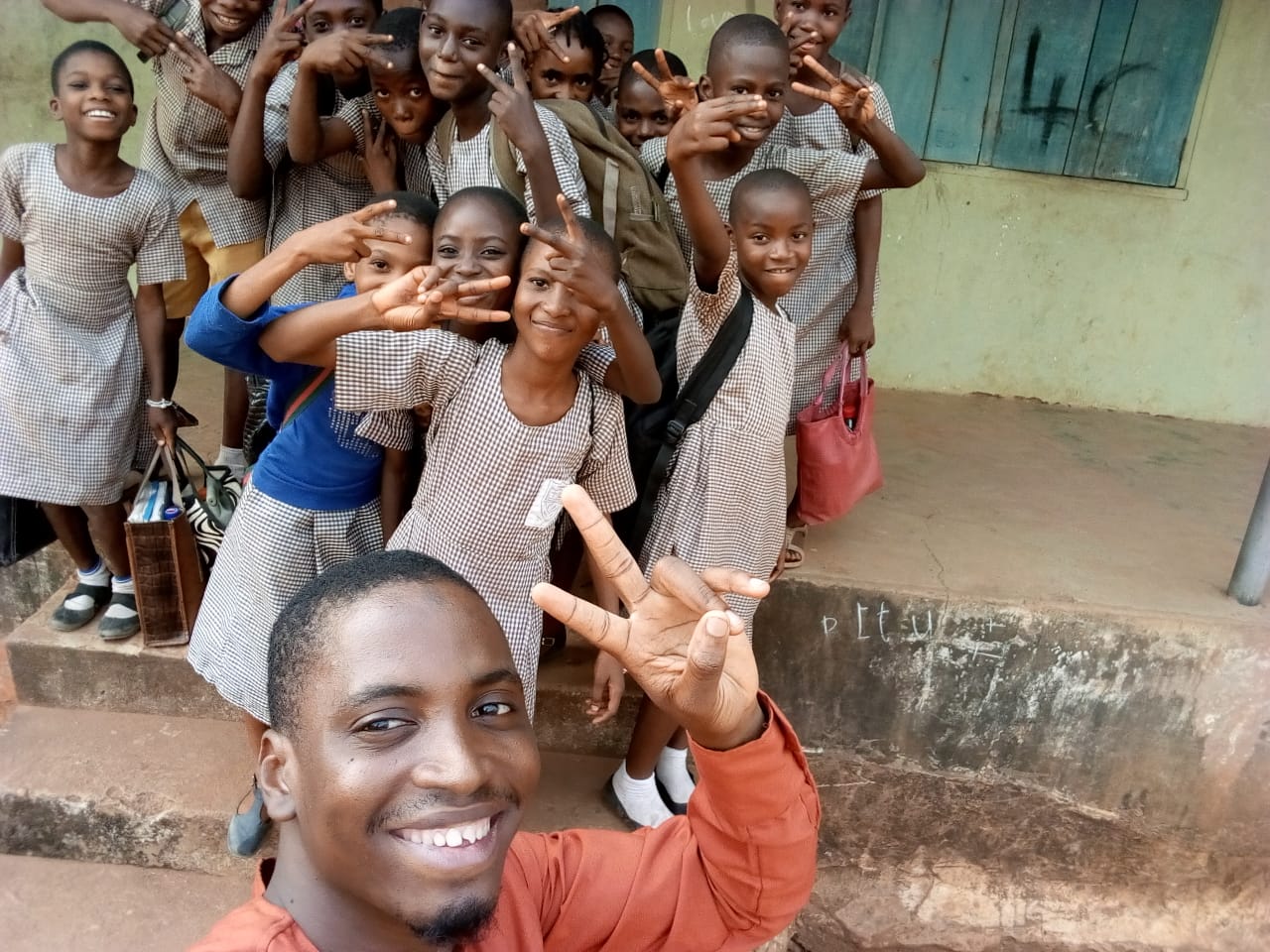 “I’ve been doing free extra lessons every day for the past 8 months. I paired them into reading groups to teach themselves how to read better.

“We’ve watched several movies to show them what’s possible and what’s not. Some are just fun movies anyways, but they do aid literacy.”

He understands the importance of total education in a child’s life and he made the classroom somewhere they can be privileged to have fun – a place they can enjoy what they see sometimes on telly.

“We do karaokes, we learn different types of songs… Actual music. There’s chess for critical thinking. We had monopoly at a point but it was stolen during the holiday. We watch YouTube videos. 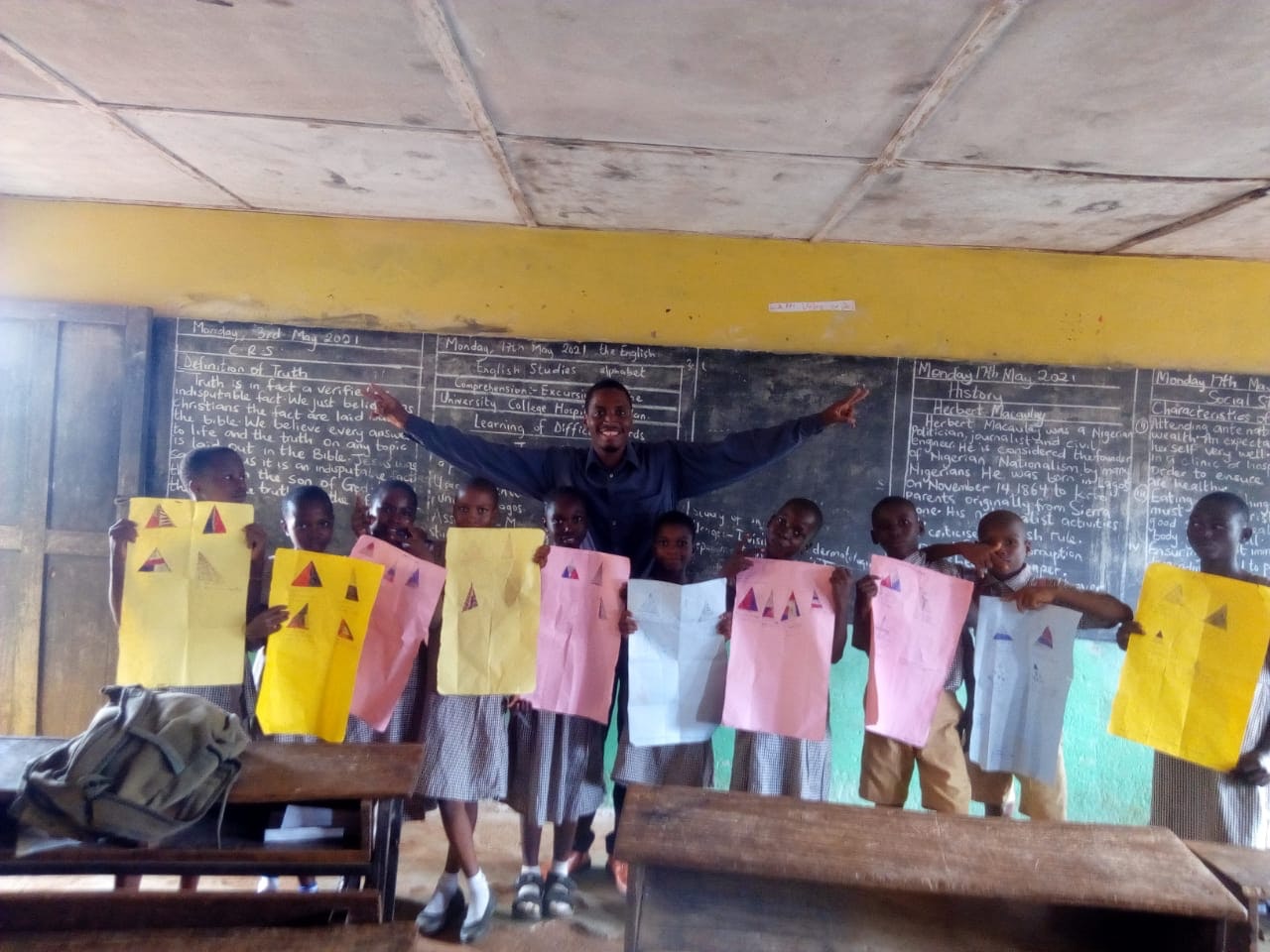 “I do a lot more. I don’t even know how to describe those. For those who don’t have books sometimes, I get them books and pens. I give them money for food too because most kids can’t learn on empty stomachs.”

What Taofik is achieving with very minimal resources isn’t coming without an expense – his social life is taking the hit. A bubbly young man, he loves to read books and currently leads the Book Cracks Book Club which he founded, a means through which he interacts with people. He loves banter too, but said he’s not been watching football – a game he loves so dearly.

On how he copes in a town that is a deviation from his childhood and lifestyle.

“I’m literally single, live alone. I have less expenses apart from food. I kinda have zero social life, so it makes sense (laughs).

“I don’t even watch football like that anymore. I guess the drive is just better. After this fellowship maybe. But these kids are already my friends. And they beat me in chess now, so it’s always fun to up my game.” 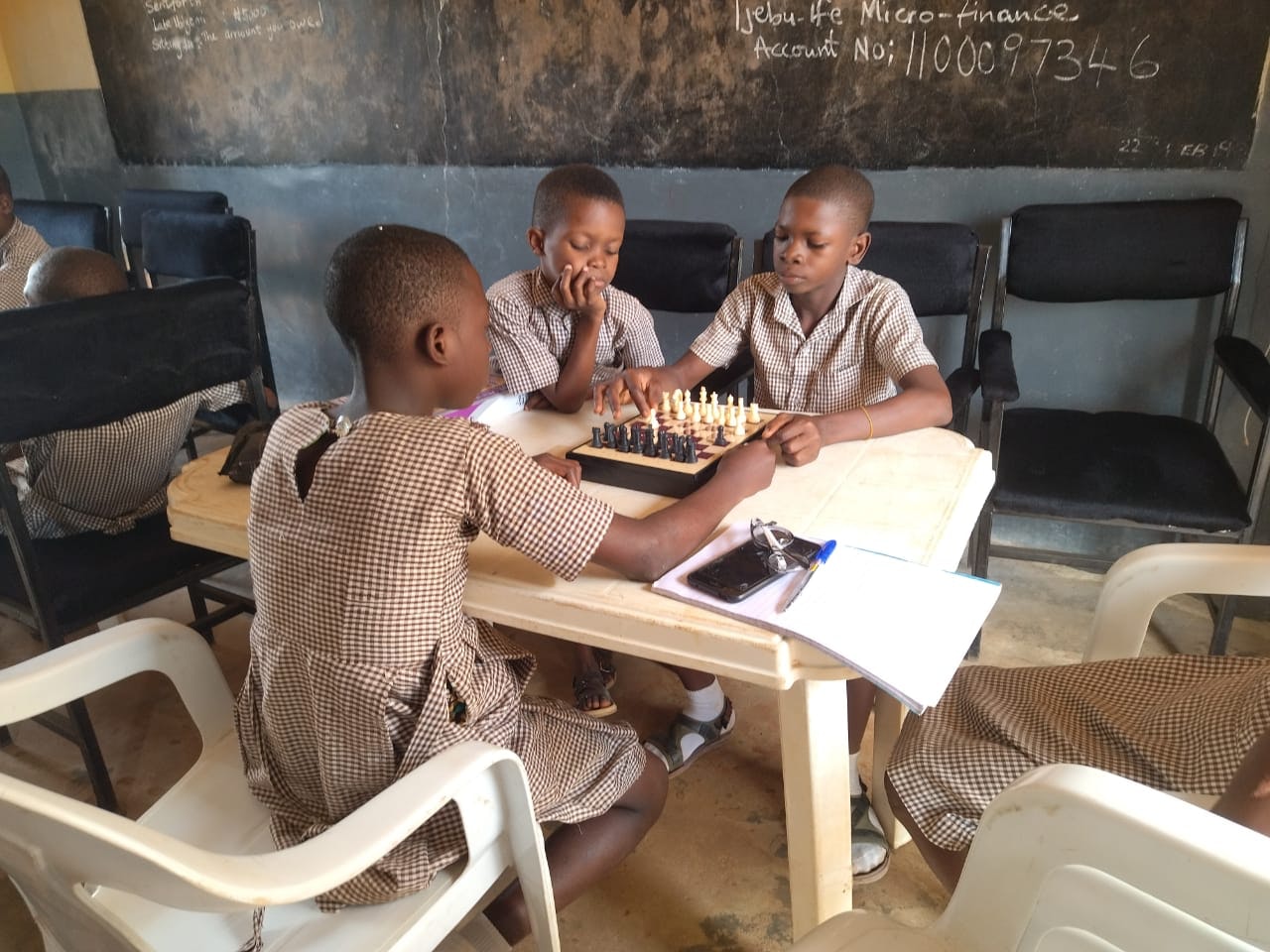 The two-year fellowship will soon be over for Taofik and the kids can’t think about his exit from the school. He hopes the government can be intentional about improving education in Nigeria as those kids need guidance and direction. They hold lots of promise and can build a great nation.

There are only a few like Taofik out there, and the path he’s laid is an example institutions can follow.