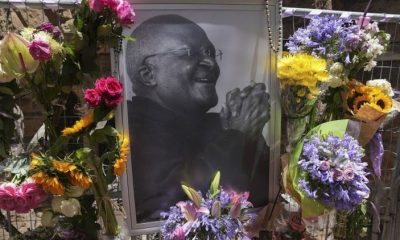 South Africa’s Archbishop Desmond Tutu has been laid to rest following an official service on Saturday morning at St George’s Cathedral in Cape Town, where he preached for years against racial injustice.

Gatekeepers News reports that Tutu, a hero of the struggle against apartheid in South Africa, died last week aged 90.

During the ceremony, his widow Leah Tutu was spotted wiping away tears as a number of friends and family paid tribute to the Nobel Peace Prize Winner.

The ceremony started with a hymn and a procession of clerics down the aisle burning incense and carrying candles in the church where Tutu will also be buried.

The requiem mass started at 10 am local time (0800 GMT) at the cathedral where, for years, Tutu used the pulpit to rail against a brutal white minority regime. That is where he will be buried.

Delivering the main eulogy, President Cyril Ramaphosa lauded the late Archbishop Desmond Tutu as “our moral compass and national conscience’ as South Africa bade farewell at a state funeral on Saturday to a hero of the struggle against apartheid.

“‘Our departed father was a crusader in the struggle for freedom, for justice, for equality and for peace, not just in South Africa, the country of his birth, but around the world.’

He also handed South Africa’s multicoloured flag to Tutu’s widow, Leah – a reminder of her husband’s description of the post-apartheid country as the ‘Rainbow Nation’.

While the Archbishop of Canterbury Justin Welby, the head of the worldwide Anglican church, said in a video message shown at a requiem Mass celebrated in Tutu’s honour Saturday at St. George’s Cathedral: “Archbishop Tutu lit up the world… that light has lit up countries globally that were struggling with fear, conflict, persecution, oppression, where the marginalised suffered.

“When we were in the dark, he brought light. For me to praise him is like a mouse giving tribute to an elephant.

“South Africa has given us extraordinary examples of towering leaders of the rainbow nation with President Nelson Mandela and Archbishop Tutu…. Many Nobel winners’ lights have grown dimmer over time, but Archbishop Tutu’s has grown brighter.’

During the ceremony, Tutu’s daughter Mpho said: “We thank you for loving our father… because we shared him with the world, you share part of the love you held for with us, so we are thankful.’

Others mourners were Elita, the widow of the last apartheid leader FW de Klerk, who died in November.