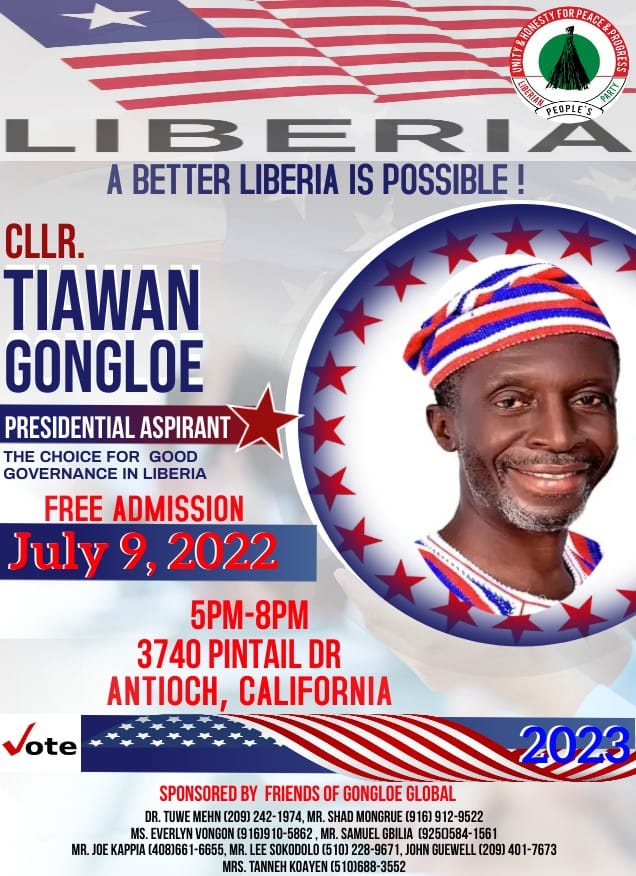 Gatekeepers News reports that Gongloe is expected to deliver his message of “A Better Liberia” is possible for good governance if elected come 2023.

He is also expected to tell the international community about his strategy to fight corruption in Liberia.

According to a statement made available to Gatekeepers News, “Counselor Gongloe will start the California tour with a town hall meeting and dinner (free admission) on July 9 at 3740 Pointail Dr., Antioch, California from 5:00 pm to 8:00 pm.”

At the venue, Counselor Gongloe is expected to meet Liberians and friends of Liberia to whom he will articulate his “Agenda for A Better Liberia.”

According to the statement, “There are over 10,000 Liberians in the Bay Area (San Jose, Oakland, and San Francisco) and the greater Northern California, including Antioch, Stockton, and Sacramento.”

The presidential hopeful is also expected to meet with elected officials of the United States Government from both the Democratic and Republican parties, authorities of major universities and business executives, and the press.

The 65-year-old is a renowned human rights activist who has worked as a special assistant to former Interim President Amos Sawyer from 1990 to 94. He is also a former Minister of Labor and former Solicitor General of Liberia. He resigned from his ministerial post in November 2010 over a policy disagreement with the President of Liberia. He is the immediate past president of the Liberian National Bar Association.

“Mr. Gongloe is known in Liberia as “Poor Man’s Lawyer” because he provides legal representation to protect the rights of the poor including journalists illegally arrested and detained by the government.

“Mr. Gongloe arrived in the United States on May 12, 2022 to make his case among Liberians in the Diaspora and the international community about the state of affairs in the country to be contrasted with his plans to build “A Better Liberia” by fighting corruption and restoring good governance. Since his arrival, he has engaged Liberians in Atlanta, Georgia; Columbus, Ohio; Fargo, North Dakota; and Minneapolis, Minnesota. He also been invited to hold town hall meetings with Liberians in Pennsylvania, New Jersey and New York.