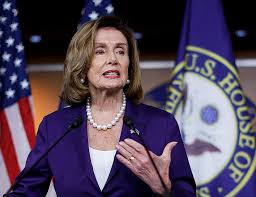 US House of Representatives Speaker Nancy Pelosi left Taiwan on Wednesday afternoon after spending less than 24-hours in the self-governed island.

She pledged solidarity and hailed the democracy of Taiwan, intensifying the tension between the US and China which claims the self-ruled island is part of its territory.

Pelosi also spoke to Taiwanese lawmakers and said in a press meeting that the US supports the status quo, but does not want anything to happen to Taiwan by force.

The US speaker said she and other members of Congress in a visiting delegation are showing they will not abandon their commitment to the self-governing island.

“Today the world faces a choice between democracy and autocracy,” she said in a short speech during a meeting alongside Taiwanese President.

“America’s determination to preserve democracy, here in Taiwan and around the world, remains ironclad.”

She stressed that: “Now, more than ever, America’s solidarity with Taiwan is crucial, that’s the message we bring in today.”

Meawhile, China has reacted to the visit and summoned the American envoy in Beijing to lodge a stern protest.

It warned that Washington will “pay a price” for its “mistakes” and asked it to stop using the Taiwan issue to contain China in any form.

China, which claims Taiwan as its territory and opposes any engagement by Taiwanese officials with foreign governments, announced multiple military exercises around the island, parts of which will enter Taiwanese waters, and issued a series of harsh statements after the US delegation touched down on Tuesday night in Taipei.