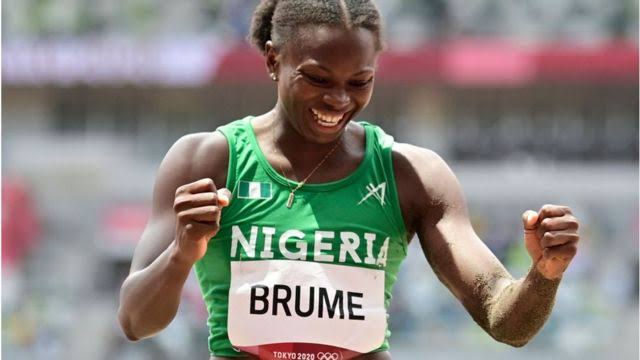 Nigeria’s Ese Brume has broken a long jump record to secure Gold for her country in the ongoing Commonwealth Games (CWG).

Gatekeepers News reports that although Brume had a no jump on her first attempt, she bounced back right away to jump 6.99m to take the lead in the final and set a new Games Record.

She added no jump, 6.99m, 6.81m, 6.99m, and 6.96m in her subsequent jumps but none of her opponents could match or surpass her thereby securing gold with a jump to spare.

Regardless, on her very last attempt, Brume jumped seven meters for another Games Record to become the first woman to jump that far in the history of the Commonwealth Games.

She has been arguably Nigeria’s most consistent athlete over the past four years.

Her heroics came on the same day her friend Tobi Amusan also set a new Games Record in the women’s 100m hurdles.