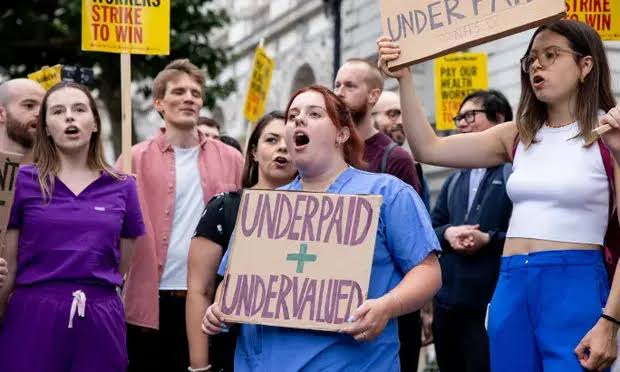 UK nurses have announced plans to embark on the biggest strike ever in December.

Gatekeepers News reports that nurses in England, Wales and Northern Ireland are to strike for two days in what is set to be their biggest walkout in the National Health Service, NHS’s history.

According to the Royal College of Nursing (RCN), the strikes will hold on 15 and 20 December. This is as a result of its pay dispute with the government.

Although nurses will still provide emergency care, routine services will be hit.

The RCN stated it had been left with no choice after ministers would not reopen talks, but the government said the 19% pay rise demanded was unaffordable.

“Nursing staff have had enough of being taken for granted, enough of low pay and unsafe staffing levels, enough of not being able to give our patients the care they deserve.”

However, it seems almost certain that walkout will increase the backlog in non-urgent hospital treatment – a record seven million people are already on the waiting list in England.

Louise Ansari, from the Healthwatch England patient watchdog, said she was “concerned” about the impact on this group of patients.