Below are the facts from the recently concluded 2021/2022 English Premier League:

Gatekeepers News reports that Manchester City have been crowned champions of the Premiership for the Sixth time on Sunday.

Although Pep Guardiola’s men knew winning was a must, they ended the first half of the match with two goals in favour of their opponent Aston Villa.

In the second half, City did not only proclaim that the determinant game was been played at their Etihad stadium by equalising, but they also went ahead to crush the hope of Liverpool’s chance of winning the League for the second time in their history by defeating Villa 3-2.

Villa manager Steven Gerrard, a Liverpool legend never won the league all through his stay with the Reds. The Reds with the hope of using the influence of his new club expected him to win the final game of the season by defeating City. However, Guardiola’s statics and determination outshined this. 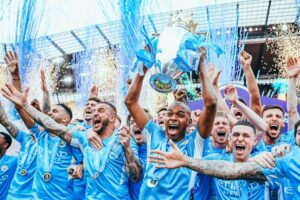 City’s victory has further crushed Jurgen Klopp’s hope of recording quadruple titles this season. The Reds who had earlier secured the Carabao Cup and the FA Cup are looking forward to defeating Real Madrid in the UEFA Champions League (UCL) final in Paris on Saturday, May 28.

Meanwhile, Chelsea, the defending Champions of the UCL not only crashed out of the biggest title in Europe this season but also finished third on the EPL table.

On the other hand, Westham who have suffered relegation and inconsistencies in the time past will be contesting in the Europa Conference League next season.

In other news, Burnley, Norwich, and Watford have suffered relegation this season.

See the EPL table below:

See the highest goalscorers of the season