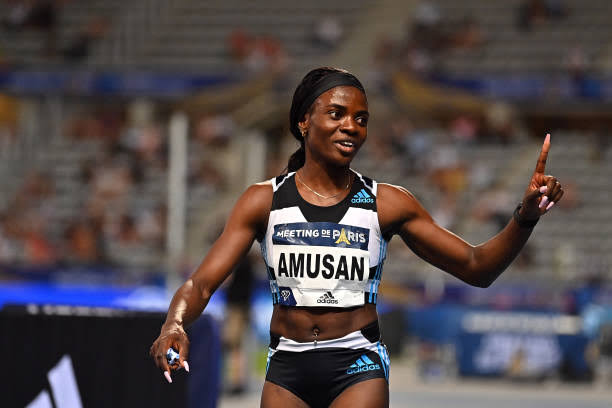 Tobi Amusan, a Nigerian athlete, has set the third world fastest and new African record in the women’s 100 meters hurdles in 12.41s at the Diamond League meet in Paris.

Gatekeepers News reports that Amusan was the third-best run of the season on the blue tracks of the Charléty Stadium on Saturday.

The 25-year-old Nigerian was only behind Puerto Rico’s Jasmine Camacho-Quinn at 12.37s and Alaysha Johnson of the US with 12.40s.

Amusan was just a second faster than she was in September 2021 Diamond League final, where she had broken Gloria Alozie’s 23-year-old national and continental record.

She continued her fine display of the season, which earned her two gold medals — in women’s hurdles and 4×100 meter relay — for Nigeria at the just concluded African Athletics Championship in Mauritius.

Amusan further ended well ahead of the pack in Paris, with Devynne Charlton of Bahamas finishing second in 12.63s while Great Britain’s Cindy Sember secured the third spot with 12.73s.

With the new time, Amusan becomes the third-fastest women’s hurdler in the world in 2022, only behind Puerto Rico’s Jasmine Camacho-Quinn at 12.37 seconds and Alaysha Johnson of the US with 12.40s.

Her recent form emphasises her quest for podium placements at the World Athletics Championship in Oregon, US, next month and the Commonwealth Games in Birmingham, England, from July 28 to August 8.

She is expected to arrive in Nigeria for the Athletic Federation of Nigeria (AFN) national trials between June 21 and 23 in Benin city, Edo state, Southern Nigeria.