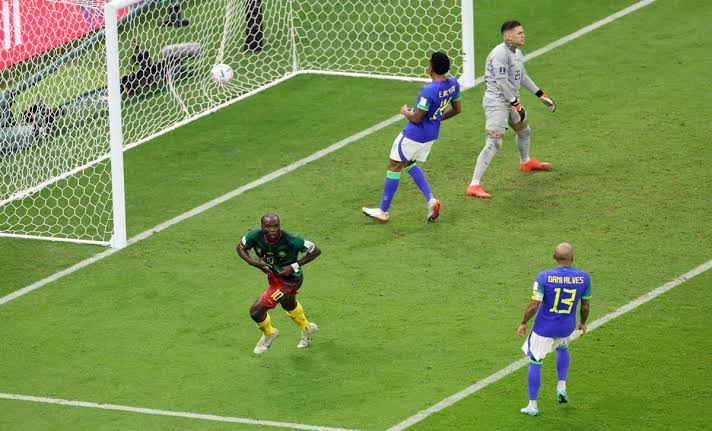 Despite becoming the first African country to defeat Brazil, Cameroon have crashed out of the Qatar 2022 World Cup tournament.

Gatekeepers News reports that Cameroon honourably crashed out of the competition after Vincent Aboubakar’s 92nd minute header secured their biggest group stage scalp since Argentina in 1990.

Aboubakar who had earlier been booked in the game, was handed another yellow for removing his shirt while jubilating after heading past Brazil goalkeeper Ederson.

The referee, thereafter gave him a handshake and a friendly slap on the head after sending him off the pitch.

The Brazilians have earlier secured 6 points from their earlier wins, this scaled them to the knockout stage. They will now take South Korea to battle for a slot at the quarter final.

It was also not a day for the black continent at the Al Bayt Stadium as Uruguay defeated Ghana 0-2. Both teams, however, didn’t qualify for the knockout stage.

Meanwhile, Portugal have lost their last match in the Group H stage to South Korea. Howbeit, both teams scaled to the round of 16.

The Portuguese will take Switzerland in the knockout stage, after Central European country defeated Serbia 2-3.