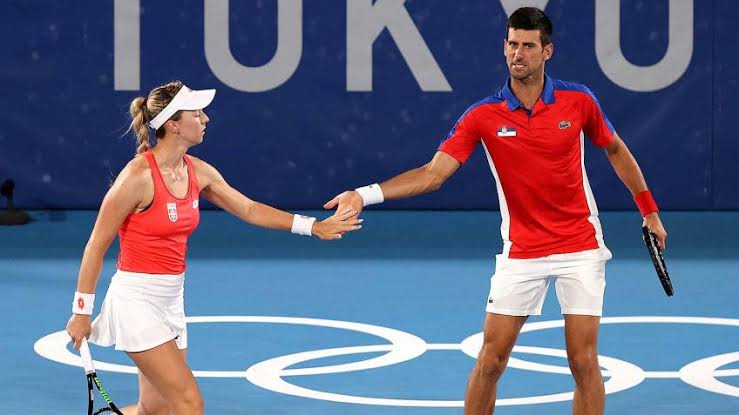 Novak Djokovic has won his first-ever mixed doubles at the Olympics.

Gatekeepers News reports that World No. 1 Novak Djokovic has continued his quest for a historic Golden Grand Slam in the singles by winning his first-ever mixed doubles at the Olympics.

Djokovic and his fellow Serbian, Nina Stojanovic got their mixed doubles campaign underway on Wednesday in Tokyo with a 6-3, 6-4 win over Brazilians Marcelo Melo and Luisa Stefani.

The Serbian pair who did not face a breakpoint on their way to victory will next face German team – Kevin Krawietz and Laura Siegemund who defeated American team – Bethanie Mattek-Sands and Rajeev Ram 6-4, 5-7, 10-8.

Fourth seed Stefanos Tsitsipas was able to get over his singles disappointment after teaming with Maria Sakkari to defeat Canadian Gabriela Dabrowski and Felix Auger-Aliassime 6-3, 6-4.

Tsitsipas and Sakkari play Barty and Peers in the quarterfinals.

Team Russia who is presently under the banner of Russian Olympic Committee (ROC) at the Tokyo Olympics recorded success on Wednesday as Anastasia Pavlyuchenkova and Andrey Rublev moved through with a 5-7, 6-4, 11-9 victory against Croatian pair Darija Jurak and Ivan Dodig. Elena Vesnina and Aslan Karatsev also raced past French duo Kristina Mladenovic and Nicolas Mahut 6-4, 6-2.