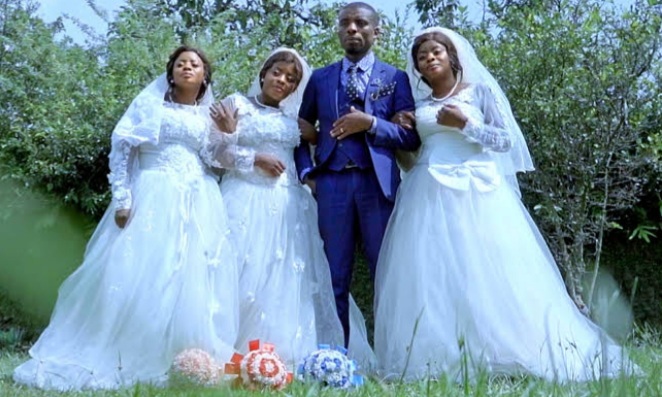 A Congolese man has sparked a debate on social media after marrying triplets at once.

Gatekeepers News reports that Luwizo from Kalehe, South Kivu in the Democratic Republic of Congo married Natasha, Natalie and Nadege in a colourful wedding.

Luwizo, In an interview, said he first met Natalie through social media and fell in love.

He noted that whenever he would go to see Natalie at their home he was always welcomed by one of the triples, marking the genesis of their relationship.

After some time, the triplets demanded to be married by Luwizo.

Luwizo said he was surprised to see the three identical women showing up at his home and demanded that he marries all of them.

“I was obliged to marry to all of them because they are triplets. It wasn’t an easy decision because until now, my parents don’t understand what I’m doing,” he said.

“At first, when we told him he had to marry all of us he was shocked. But because he had already fallen in love with all of us, nothing couldn’t stop our plans since we were also in love with him.

“Even though people consider it impossible for three women to share one husband, but to us, sharing everything has been our life since childhood,” Natalie said

TotalEnergies To Fund Planting Of 40 Million Trees In Congo

French oil and gas producer, TotalEnergies SE has announced that it will fund the planting of trees in Congo. Gatekeepers News reports that as...