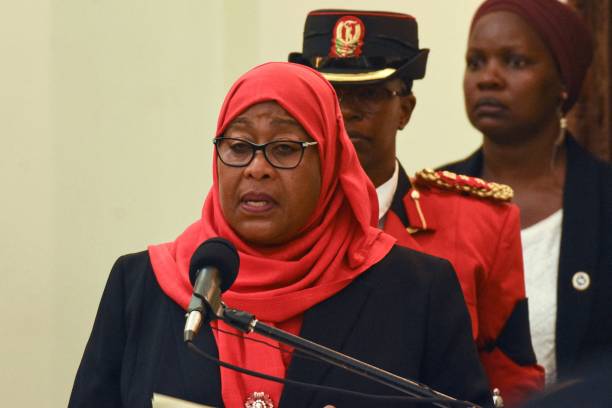 New Tanzanian President Samia Suluhu Hassan addresses after swearing-in ceremony as the country's first female President after the sudden death of President John Magufuli at statehouse in Dar es Salaam, Tanzania on March 19, 2021. - Hassan, 61, a soft-spoken Muslim woman from the island of Zanzibar, will finish Magufuli's second five-year term, set to run until 2025, after the sudden death of John Magufuli from an illness shrouded in mystery. (Photo by STR / AFP) (Photo by STR/AFP via Getty Images)

Africa’s only female political head of state, Samia Hassan of Tanzania has spoken about her first year in office.

Despite being Africa’s only female number one citizen, she has declined to be referred to in an official capacity but simply by her first name, Samia or “Mama Samia”.

Upon her assumption of office, she aimed to boost Tanzania as a whole, including “The Royal Tour” film which will be broadcast in April this year.

Similarly, Mama Samia has travelled across the country, along with US documentary makers, to show what the country has to offer by ensuring the world knows that Mount Kilimanjaro and The Serengeti are within her borders.

When asked if Tanzanians have adjusted to having her as president?

“Go and ask them today. I feel I’m doing my job. I feel like I’ve delivered,” Mama Samia responded.

Having inherited the nation from COVID-sceptic Magufuli, she added, “Instead of investing the money on masks and hand sanitiser and vaccines, we invested in bringing better healthcare to villages – building healthcare centres and making class sizes in schools smaller. Water supply improved.”

On her achievement so far, she said “The one most important thing I [achieved is], peace, security and stability of my country. That’s the most important item which I can say I managed to maintain.”