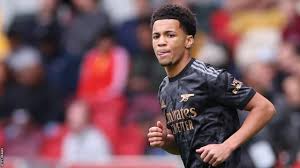 Arsenal’s Ethan Nwaneri made Premier League history on Sunday as he became the youngest ever player in the English top-flight.

Gatekeepers News reports that the young midfielder is 15 years and 181 days old.

He also set a new landmark, breaking Cesc Fabregas’ record for the youngest Arsenal player in any competition.

Ethan Chidiebere Nwaneri was born on March 21, 2007 to Nigerian parents.

In this article:#Featured, Ethan Nwaneri